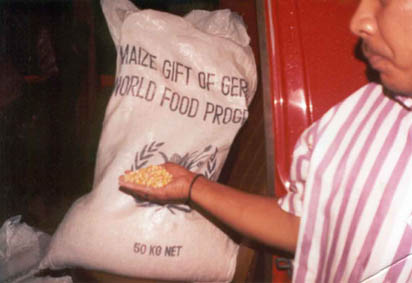 Cochabamba/Guatemala/Managua/Roma/Washington D.C., June 10, 2002 – The World Food Programme (WFP) and the United States International Agency for Development (USAID) have distributed food contaminated with GMOs not fit for human consumption and illegal in many regulatory systems around the world, announced civil society groups in Bolivia and Guatemala and Nicaragua. They demanded that genetically engineered crops not be sent as food aid. They also emphasized the critical need to protect the birthplaces of corn from genetic contamination.

The Bolivian Forum on Environment and Development, a civil society group, denounced that samples tested from food aid provided by USAID were positive for StarLink, a genetically modified variety of corn not authorized for human consumption anywhere in the world due to its potential to create allergies.

“The U.S. considers this genetically engineered corn unfit for human consumption and has banned it for years. Yet it has been sent to Bolivia as food aid,” said Gabriel Hervas, President of the Bolivian Forum on Environment and Development.

This is the first time that StarLink has been found in a developing country sent through food aid and the first time it has been found outside the U.S., Japan and Korea since originally detected in the U.S. in August 2000. All test results were confirmed using DNA analysis conducted by Genetic ID, an independent laboratory located in Iowa.

StarLink was not approved for human consumption due to a finding by the U.S. Environmental Protection Agency (EPA) that the bacterial protein engineered into every cell of the corn exhibits “characteristics of known allergens.” Possible health effects of this category of allergen include nausea and anaphylactic shock, but are not currently known due to a lack of adequate testing by government and industry. The corn was originally found by Friends of the Earth and the Genetically Engineered Food Alert coalition in taco shells manufactured by Kraft Foods.

The U.S. government recalled over 300 contaminated food products, more than 200 people reported possibly related illnesses, and the EPA concluded one year later on July 28, 2001 that no level of StarLink could be determined to be safe for human consumption. The manufacturer of the corn, Aventis, appealed to the EPA to allow a tolerance level for StarLink in food, but was denied. The company has since been mired in multiple lawsuits and has sold its biotechnology division to Bayer.

EPA scientific advisors concluded in their final report on StarLink that the U.S. Centers for Disease Control had conducted flawed tests to determine if StarLink is a human allergen. In their July 2001 report, they recommended that more testing be conducted, especially with children and other particularly vulnerable populations, but EPA has taken no further action.

The sample sent for testing by FOBOMADE also contained two other types of engineered corn not approved in the European Union (EU) – RoundUp Ready and BtXtra, both produced by Monsanto.
Colectivo Madre Selva, a citizens’ group in Guatemala also examined a sample of seed sent as food aid and found three varieties of engineered corn not approved in the EU -Liberty Link produced by Aventis and Monsanto’s BtXtra and RoundUp Ready.

In a letter sent by the WFP in Guatemala on April 1, 2002 said that “All food given by the WFP is certified by the health authorities of the Minister of Agriculture, Ranching and Food and the Minister of Public Health and Social assistance in order not to allow the introduction of GM products”. The discovery of GMOs by Colectivo Madre Selva indicates a lack of adequate monitoring systems and neglect by the WFP of the food security of Guatemala.

Centro Humboldt, working with other members of the Network for a GMO-Free Nicaragua, obtained samples of food aid from different parts of the country. One seed sample contained 3.8% of a GMO variety approved in the U.S. and the EU, and three samples of a corn and soy flour blend contained Monsanto’s RoundUp Ready corn.

In a news release dated May 24, 2002, the World Food Program declared that “The WFP does NOT distribute food that is NOT acceptable for human consumption by the citizens of the producing countries (donor countries) and by the countries that receive the food assistance.” In 2000, Dan Glickman, then Secretary of the U.S. Department of Agriculture, said that the agency would make sure StarLink did not enter food aid.

Food aid with genetically modified seed may be another pathway of genetically engineered crops into one of the birthplaces of corn, creating a form of biological pollution that cannot be recalled. Commercial imports of corn seed for food to Mexico has recently been reported as a likely pathway threatening native Mexican varieties.

Background material:
Photos, test results, position statements by the World Food Program, links to the World Food Summit webpage, fact sheets on genetically engineered StarLink corn, the regulatory history of StarLink, and the laboratory testing protocol are located on the Friends of the Earth website at: www.foe.org/foodaid. 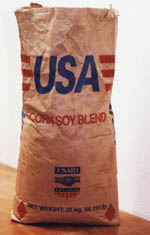