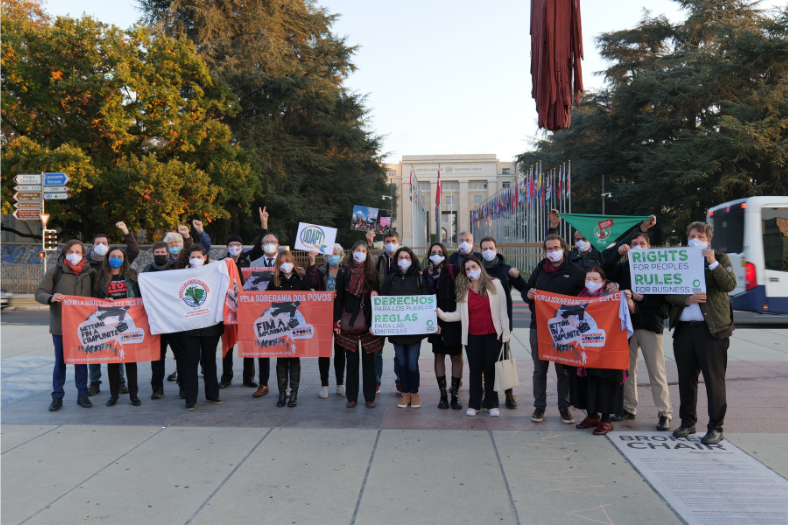 Today, United Nations member states resume negotiations in the seventh session of the Open-ended intergovernmental working group (OEIGWG) mandated to elaborate an international legally binding instrument to regulate, in international human rights law, the activities of transnational corporations. The UN High Commissioner for Human Rights, Ms Michele Bachelet, opened the session remarking that the world is witnessing a “growing consensus on the need of binding regulations on business and human rights”.

Global South countries intervened in strong support of the Binding Treaty process –  South Africa, Namibia, India, Indonesia, Pakistan, Philippines, Bolivia, Venezuela, Cuba and Palestine among others. For the first time delegates from all major global economies shared their views on the Binding Treaty process and content. All of which goes to show that after seven rounds of negotiations states cannot ignore the urgent need for an effective instrument such as the UN Binding Treaty.

The Ecuadorian Chair of the OEIGWG opened the seventh session by affirming that the negotiations must be “State-led”, which raises concerns about how civil society´s contributions will be included.

The continuous broad participation of  communities affected by transnational corporations’ activities, civil-society organisations, trade unions and social movements makes it one of the most strongly supported processes in the history of UN OEIGWGs. The Global Campaign to Reclaim Peoples Sovereignty, Dismantle Corporate Power and Stop Impunity (Global Campaign)1, representing 260 million people globally affected by Transnational Corporations has, once again, a strong presence in Geneva providing vital recommendations and critical analysis.

Tchenna Masso, from the Movement of Peoples Affected by Dams (MAB), La Via Campesina and the Global Campaign, remarked during the opening session, “Let me remind you of the basic problem that brings us together here. At the heart of the matter is the fact that, although the human rights violations committed by transnational corporations through their chains are obvious, States are usually unable to punish the culprits or to make reparations to the victims.”

Ubrei-Joe Mariere, from Friends of the Earth Africa spoke on behalf of the Global Campaign, “The climate, biodiversity and Covid crises are results of a socio-economic model that favours corporate profit over the protection of human rights and the environment. Travel restrictions due to the pandemic, unequal access to vaccines, financial barriers, digital connectivity and differing time zones limit the participation of the Global South, including States and affected peoples. For the Binding Treaty negotiations to be inclusive and fair, we must ensure that civil society – especially those most affected by the impunity of transnational corporations – are able to follow, intervene and influence the direction of the negotiations.”

Mary Ann Bayang, from the Indigenous Peoples Rights International in the Philippines, declared that, “The peoples, citizens, affected communities and social movements place great hope in the success of the process initiated in this OEIGWG to bring transnational corporations under the law. States also have an interest in the adoption of such a treaty that will allow them to recover their lost sovereignty. It is in this spirit that the Global Campaign has been engaged in the process of negotiating this Binding Treaty. We note with great regret that the current draft treaty falls far short of the OEIGWG’’s mandate. It is essential that this situation be rectified and the process put back on track.”

Participants in the negotiations emphasized the urgent need for binding regulations for Transnational Corporations in light of the  Covid19 pandemic.

The Brazilian AIDS Interdisciplinary Association, member of the Global Campaign said,  “Adopting a Binding Treaty is urgently needed to bring justice to people denied access to health technologies, and whose lives have been taken away by corporate greed. The treaty must include the primacy of Human Rights as a fundamental principle. Thus, interests included in trade and investment agreements must be subordinated and  subjected to mandatory respect for Human Rights.”

Miguel Urbán, Member of the European Parliament for The Left and member of the Global Parliamentarian Network in support of the Binding Treaty added, “The absence of clear and binding international norms for the respect of human rights feeds the impunity and abuse of global corporate power.”

The Global Campaign will be in Geneva all week working to ensure that its proposals for the UN Binding Treaty are taken into account and included in the current drafting process.

For further information or to arrange interviews you can contact:

This round of negotiations is revising the third draft of the binding treaty, published on August 17, 2021, which fits in the negotiation process started in 2014 with the adoption, by the Human Rights Council, of Resolution 26/9. UN information on the Mandate of the OEIGWG https://www.ohchr.org/EN/HRBodies/HRC/WGTransCorp/Pages/IGWGOnTNC.aspx

The global campaign published this statement in September 2021 in response to the release of the third revised draft: https://www.stopcorporateimpunity.org/comunicadotercerborradordeltratadovinculante/

Read the press release on the Global Campaign website.