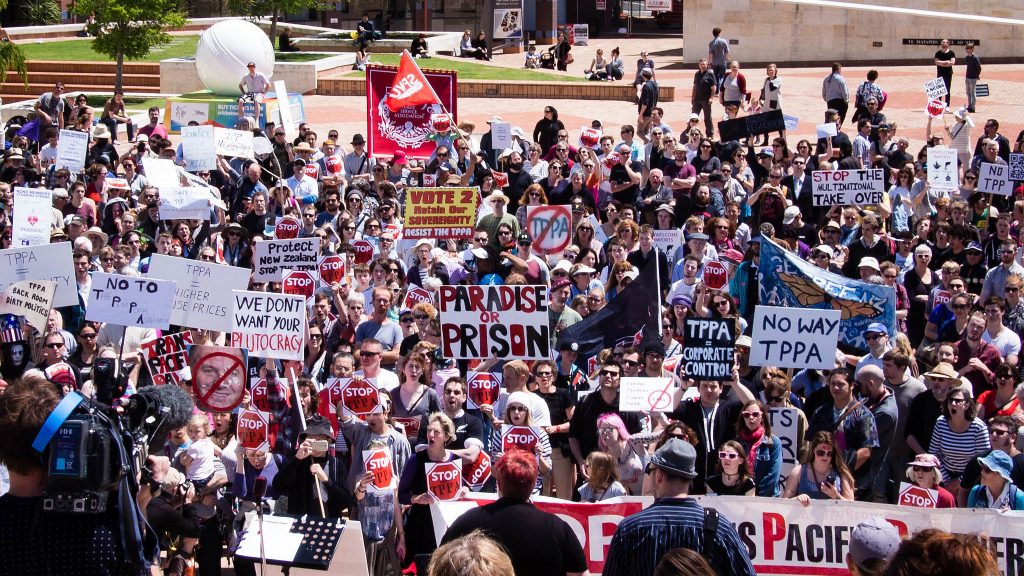 A high-level meeting of governments from the 12 Trans Pacific Partnership (TPP) negotiating parties together with Korea, Colombia and China has failed to take tangible action that would bring the deal back to life. Yet disappointingly countries remain committed to the broken trade model.

The TPP, which faced popular opposition over several years, suffered a knockout blow after the US recently withdrew from the deal. The deal still hovers around like zombie with the New Zealand trade minister stating “It is far too soon to say the agreement itself is finished. We will use the next couple of months to analyze this further.”

Trade policy is at a cross roads, with backlash against corporate globalization. From Brussels to Jakarta, millions of people are voicing their discontent, taking to the streets to challenge mega trade deals, such as the Transatlantic Trade and Investment Partnership (TTIP) and the 16-country Regional Comprehensive Economic Partnership (RCEP).

This crossroads provides a historic opportunity to fundamentally change trade policy for the public good. Yet, the meeting in Chile shows that governments are ignoring the challenge to globalization, opting instead for more of the same. This tactic not only indulges corporate interests, the very driving force of globalization, it also dangerously fuels the rise of populism.

The meetings official statement sounded like a broken record as it recalled “the significance of the TPP highlighting its principles and high standards as a key driver for regional economic integration and promoter of economic growth”.

Governments must acknowledge that the TPP failed because it puts corporate rights ahead of people. The deal would have restricted governments’ ability to produce regulation for environment protection, access to affordable medicines, financial stability and workers’ rights. These fundamental flaws are the reason for the unprecedented public mobilization against the deal and its eventual failure.

Friends of the Earth International, alongside two hundred civil society organisations from 15 countries is calling for a trade policy reset, not reusing the failed TPP as a model for future trade agreements.

After five years of negotiations, the sudden US withdrawal has left the deal in shambles. The remaining 11 countries party to the deal are now left clinging to straws. The danger is that governments are desperate for any trade deal to replace it.

While not a TPP member, China attended the meeting, using it to champion the Regional Comprehensive Economic Partnership (RCEP) as a replacement deal. Yet things are not running smoothly for this trade deal either. Last week the RCEP negotiations ended with little progress.

It is time for governments to accept that the free trade ‘dream’ of cheap goods, green growth, global prosperity and socially responsible corporations has become a nightmare. In a context of economic crisis with record levels of unemployment and accelerating climate change, the only real winners of corporate globalization are the top 1% and multinational companies that are becoming wealthier year on year. Eight individuals currently have the same wealth as half of the world population. So much for trickle down economics.

In a blatant denial of this reality, we are told that the winners are sweatshop factory workers in Bangladesh who have escaped rural poverty to work 12 hour days in unsafe factories. Or part time call center workers in France who can barely afford to pay the bills, but do have cheap large screen TVs. Or China, which has seen incredible export-led growth, yet earlier this year saw 460 million people affected by pollution levels that were unsafe to human health.

Progressives must lead the fight for a more just trade system, with a positive vision of internationalism. If not it will continue to play straight into the hands of the right-wing populists who are trying to jump on the bandwagon of public discontent. For example, Trump’s opposition to the TPP is rooted in xenophobia and racism, not the devastating impact these deals have on climate action and workers rights. His idea to promote bilateral trade deals to ‘Make America Great Again’ or to force the world to pay more for American pharmaceutical goods is nothing new. The US already has more than 90 bilateral trade and investment agreements, which favor US corporations.

Rather than try and revive the failed TPP deal, governments should listen to the millions of people demanding a new trade model that works for all. They can start this process today by scrapping failed corporate trade deals and supporting local economies, human rights, a clean environment, better social protection and more responsible energy and food production.