Skip to content
HomeNewsThe Trans Pacific Trade Deal Stumbled. Now Is the Time to Walk Away 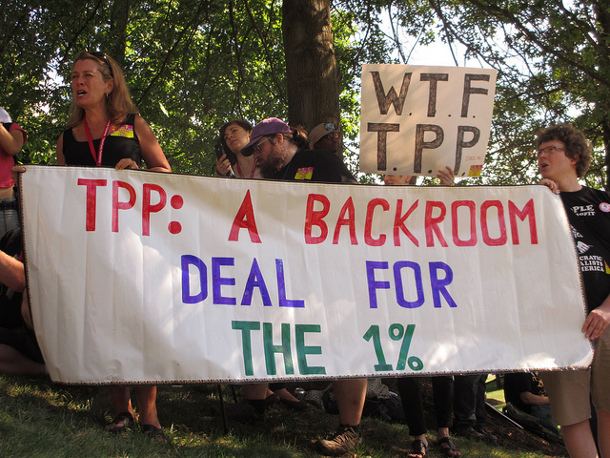 After more than five years of negotiations, trade ministers meeting last week failed again to reach an agreement on the Trans Pacific Partnership (TPP), a secret trade agreement between 12 countries in the Pacific that make up 40% of the global economy.

This is a major opportunity for governments to now walk away entirely from this trojan horse deal that is bad for people and for the planet.

The latest round of failed talks, which took place in Hawaii, was anticipated to ‘seal the deal’ with government officials stating that “it was 98 per cent complete.” Yet the TPP trade agreement has stalled again because of a range of important disagreements over pharmaceutical patents, market access for agricultural products and the corporate rights to sue governments for public policy.

The New Zealand Prime Minister John Key admitted that the TPP would increase the price of medicine. For many countries this means a choice between life and death for their citizens, and negotiators refused to budge on the issue.

Growing public pressure has put the agreement into the spotlight. It is harder for ministers to agree to something disastrous for their country on a beach in Hawaii when they know people back home are watching.

A wide range of people voiced their opposition to TPP, including US trade unions, Malaysian state-owned enterprises, Australian environmentalists, Japanese rice farmers and Chilean health advocates. Social movements and civil society are campaigning to hold their governments accountable and raise public awareness about this deal, and it is making a difference.

Democracy can save us from the TPP

The TPP negotiations are completely secret, despite massive implications on nearly every aspect of our society and economy—including health, agriculture, government services and internet freedoms. What we do know has largely been learned from documents leaked by whistleblowers.

Yet the longer the negotiations drag on, the more chance there is that democracy will save us from the TPP. The Canadian election is coming up in October and conservative leader Stephen Harper—currently fighting for his political life—is under pressure from farmers on the TPP. Canadians must raise the TPP as a key election issue, with candidates and political parties making their positions clear.

Elections are important moments for citizens to have a say in the direction of their country. Informed decision can only be made with proper information.  The text of the deal must be released so the public can properly debate and make up their minds before they go to polls.  It is time to open the TPP up to democracy and for people to have a say.

The US presidential election season is also starting and will put more public pressure on this issue. If the TPP is not finalised by September it could get pushed back to 2017 or stalled indefinitely.  The Democrats do not want this divisive issue to dominate, as the majority of democratic senators voted against President Obama’s bill to fast track the trade agreement.  The more people hear about this deal the more they dislike it, and in 2016 many members of congress will be reluctant to cast a controversial vote for fear of losing their seats.

TPP a threat, not a ‘victory’ for the environment

The U.S. Government has claimed that the conclusion of the TPP’s environment chapter in Hawaii last week represents a major win for the planet. This is incorrect and an attempt to divert attention away from the failure of the negotiations.

Environmental chapters in Free Trade Agreements (FTAs) are generally narrow in scope and weak, with provisions not legally binding.

The U.S-Colombia FTA  claimed similarly high standards for protecting nature, but it has never been used to curb trade in illegally-harvested timber or endangered species, a major issue in Colombia. According to sources, it appears that the TPP Environment chapter may be even weaker than its predecessors.

Instead of protecting the environment, the TPP would undermine regulations on a vast range of issues including food safety, genetic modification, chemical use, polluting fuels and climate change.

The negotiations favour safeguards for corporate investments over safeguards for nature. For example, the TPP  is designed to protect “free trade” in dirty energy products such as tar sands oil. This will lead to an increase in coal, oil and gas exports, fuelling global warming. The TPP would  also further cement the unfair Investor State Dispute Settlement (ISDS) mechanism that enables foreign corporations to sue governments for protecting the environment.

Just last week, Canadian mining giant Gabriel Resources announced that it would seek arbitration against Romania for not allowing a gold mine that would have destroyed four mountains and created a giant cyanide pool. Romania is now facing the prospect of hundreds of millions of dollars in fines for doing the right thing, protecting its people and its environment.

Time and time again trade an investment agreements are used to support corporate profits at the expense of the environment. The TPP’s environment chapter is totally inadequate, and unlike other investor rights chapters, it would not be effectively enforced.

The failure to conclude the TPP agreement in Hawaii signals a potentially terminal stall in these secret negotiations. The next few months are critical.

If you are concerned about climate change and human rights now is the time to make your voice heard about this destructive deal.

A version of this article was originally run by Common Dreams