Skip to content
HomePressTime for people to Reclaim Power 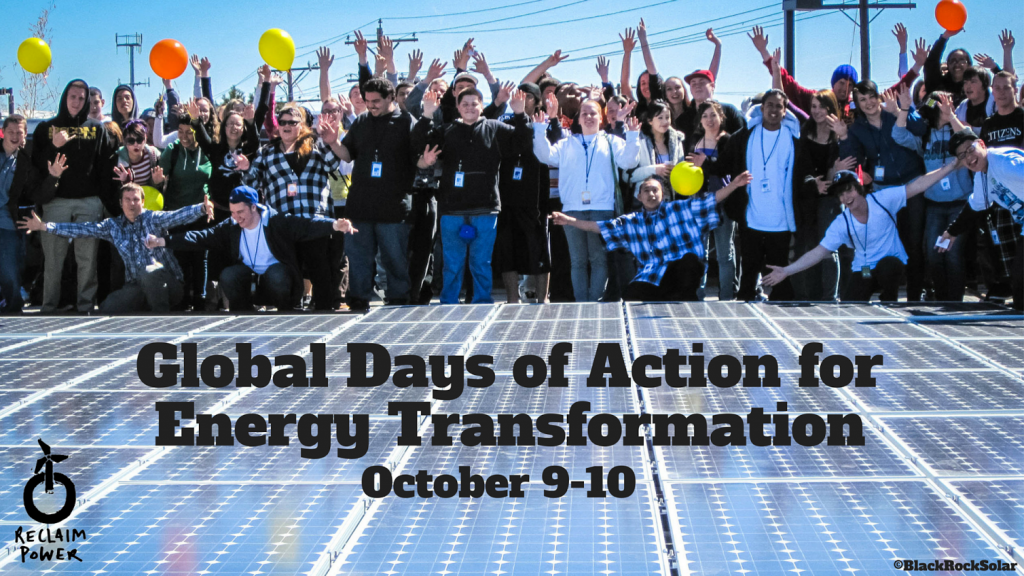 BONN, GERMANY, October 8, 2015 –  Ahead of the final round of United Nations climate negotiations in Bonn [1] before the Paris climate summit later this year, a global alliance is highlighting the need to transform our energy system and our economic system, and to stop climate change, with the October 9-10 days to ‘Reclaim Power’. [2]

“Global consumption of energy today is huge and rapidly rising, but more than 1.3 billion people are without access to electricity, and many more have barely enough to fulfill the right to a dignified life. The time has come to Reclaim Power – to take control of our own energy systems. Friends of the Earth International groups are taking part in  #ReclaimPower events and calling on people everywhere to join us,” said Lucy Cadena, climate justice and energy coordinator at Friends of the Earth International.

Climate change is wreaking devastation on our food and water systems and is causing stronger and more frequent deadly weather events that destroy homes, livelihoods and communities, particularly among the poorest and most vulnerable.

“The energy sector is the largest, fastest-growing contributor to climate change. More than a third of all human greenhouse gas emissions come from burning fossil fuels such as coal, oil and gas for energy,” said Lucy Cadena.

“The harm comes not just from fossil fuels. The aggressive production and promotion of large-scale agro-fuels at the expense of food and livelihoods, mega-dams and hydro projects that devastate ecosystems and communities, nuclear power, and toxic burning of waste and garbage for energy all form part of today’s dirty energy system,” she added.

#ReclaimPower is a global call from social movements, international networks, non-profit organisations and grassroots groups united across continents to:

There are encouraging signs.

The installation of renewable energy is also increasing in many countries. In the United States, for instance, solar energy is the fastest-growing source of power. In the UK, onshore wind energy has become cheaper than electricity from any other source.

As October 9 and 10 are also the first two days of the World Bank and International Monetary Fund meetings in Lima, Peru, #ReclaimPower organisers are also calling for these international financial institutions to stop public handouts to dirty energy.

FOR MORE INFORMATION ON RECLAIM POWER

FOR MORE INFORMATION ON FRIENDS OF THE EARTH INTERNATIONAL

Lucy Cadena, climate justice and energy coordinator, Friends of the Earth International, +44 7580 270129 or lucy.cadena [at] foe.co.uk

Photos of Reclaim Power actions worldwide can be found at www.reclaimpower.net

[1] Government representatives are meeting at the UNFCCC in Bonn on October 19-23. According to observers, including a recent study by Climate Interactive, the national climate pledges submitted by world governments so far are not enough to stave off dangerous global warming.

[2] Reclaim Power is a convergence of worldwide efforts by social movements, international networks, non-governmental organizations and grassroots groups alike to not only fight against dirty and harmful energy but also to fight for the people’s rights to energy, as well as public- and community-controlled renewable energy.
The movement organized 580 actions in 60 countries throughout October 2013, and carried out 630 actions just across one week of global actions in October 2014.
On Oct 9-10, 2015 even more individuals and groups are poised to join Reclaim Power and call for climate justice.