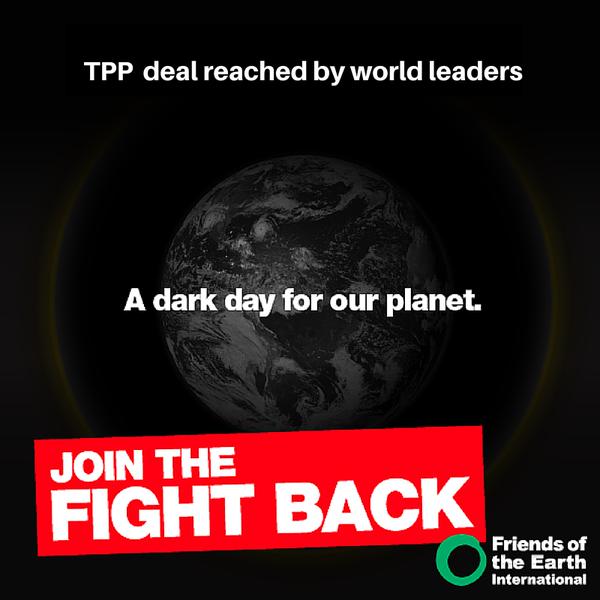 ATLANTA, USA, October 5, 2015 – Today trade ministers from 12 countries negotiating the giant ‘Trans Pacific Partnership’ reached an agreement on a trade deal which sets the economic rules for 40 percent of the world economy.

Friends of the Earth International warned that the ‘Trans Pacific Partnership’, or TPP, will threaten people and planet, if ratified.

“This is a sad day for our planet, as the TPP favours safeguards for corporate investments over safeguards for nature.  The TPP chapters on technical barriers to trade will threaten regulators’ capacities to effectively regulate the roughly 85,000 chemicals in commerce needed to protect human health and our environment.”

“But the fight is not over, the TPP still faces a number of challenges before being ratified  at the national level, with a hostile US Congress, an election in Canada, a court action in Japan and wide spread opposition in  Malaysia. If you are concerned about climate change and human rights now is the time to make your voice heard about this destructive deal.”

“The TPP is a ticking time-bomb for climate policy, because it further cements the unfair Investor State Dispute Settlement (ISDS) mechanism that enables foreign corporations to sue governments for protecting the environment.  Many government policies needed to address global warming will be subject to suits brought before biased, not trasparent and undemocratic international investment tribunals.”

“TPP Intellectual Property rules will increase patent and data protections for pharmaceutical companies, resulting in higher prices for medicines. This means that life-saving drugs will be out of reach for many who need them. This is a clear example of why national governments should reject this bad trade deal.”