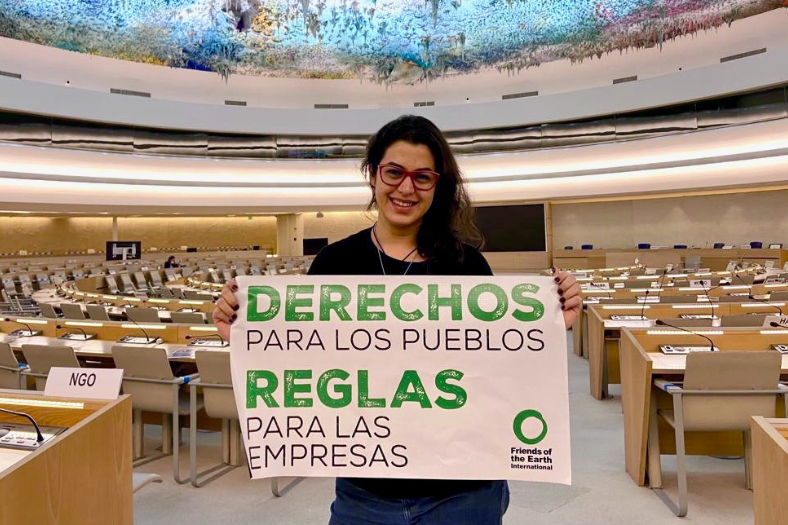 The eighth round of negotiations for a UN Binding Treaty to regulate the human rights violations committed by transnational corporations begins this Monday 24 October 2022, in Geneva, Switzerland.

These international talks began in Geneva in 2015 at the UN Human Rights Council. This year, they present new challenges for social movements and organisations that have been pushing for this process since the start. They work together in the Global Campaign to Dismantle Corporate Power.

We interviewed Letícia Paranhos, the Economic Justice programme coordinator at Friends of the Earth International, to understand why the federation believes that the Binding Treaty is such a key tool for the defence of human rights.

What is corporate impunity? Why is it important for a federation like Friends of the Earth?

“Many experts, social movements and Friends of the Earth International understand it through the lens of the “architecture of impunity”. This concept places transnational corporations at the centre of the capitalist, racist and patriarchal system. It explains how, over the years, these corporations have developed thousands of ways to avoid punishment for rights violations, and continue violating rights in order to fuel their profits.

As an environmental federation which is trying to change the system, one of our goals has to be to fight for mechanisms or instruments to stop corporate impunity. We know that not everything happens at the UN. Not everything that is decided there becomes a reality, including laws. We are fighting for laws, but we know that the struggle against corporate power must come from peoples’ organisations and mobilisation, from building peoples’ power. The communities that are affected by transnational corporations also understand that we must work against corporate impunity.

That’s why it’s so important for us at Friends of the Earth. We see that wherever transnational corporations are present, lands and territories are being looted. But they are not just lands and territories. They are also history, memory, knowledge, seeds. It is there that people are resisting and building emancipatory projects to change the system.”

How would you explain to someone the importance of a UN Binding Treaty?

“In the world we live in today, corporations have many rights to protect their profits. This is something that needs to change. Free trade agreements are a good example of how these rights are ensured. In contrast, there is no regulation under international law today to hold corporations accountable. We don’t have any regulatory frameworks in international law that include obligations for transnational corporations. This gap in the legal system is precisely one of the pillars of the architecture of impunity.

Free trade agreements often allow corporations to sue states if a public policy reduces their profits, for instance. But neither affected communities nor States have space to sue corporations for their human rights violations. The law is not everything. But, it should and could be a mechanism for us to have a fairer struggle against the violations we suffer from corporations.

An effective, well-written Binding Treaty that includes many of the proposals of the Global Campaign can be a tool to reduce the current power imbalance. What we want is rules for corporations and rights for the people.”

Can you explain the links between economic justice and the cases that feature in the UN Binding Treaty negotiations?
For example, the collapse of dams owned by Vale corporation in Brazil, causing hundreds of deaths. What could change for local communities if there were a Binding Treaty?

“Think about how many years have passed since Vale’s dams collapsed in Brazil. Consider how companies continue to increase their profits, despite these disasters, while communities have not received any financial reparation. Not even one house was built after the crimes committed by Vale. This is an example of the absurd inequality of economic justice.

The dam cases are very telling because they show that the richest 1% still have their profits while the people have none of their rights reestablished, let alone economic rights.

The Movement of Peoples Affected by Dams (MAB, in Portuguese) is an example of how only peoples’ struggles can change lives. I cannot say that the Treaty alone will change this power asymmetry in the way that we urgently need. But we also need to find and establish national regulatory frameworks, complementary to the Treaty. In Brazil we already have Bill 572 of 2022, which established a framework law on human rights and corporations. If it passes, the Bill would become the first national law with direct obligations for transnational corporations.

What could change with the UN Binding Treaty would be, for instance, that the company would have to stop operations while on trial for a human rights crime. Also, reparation would be ensured. From the process to prevent human rights violations, to full reparation if violations occur, everything would be led by the affected communities.”

What are the main challenges for next week’s negotiations?

“The challenges will come from the balance of power at the UN. The recent coups d’état, especially in Latin America, have had the direct consequence of weakening the contents of the draft Treaty. We don’t want empty pages. We don’t want a Treaty that includes more of the same insufficient guiding principles. The challenge will be to fill this document with contents that will make the Treaty truly effective.”

What would be a good result at the end of the week?

“A good result would be for all of the draft proposals from the Global Campaign to be more incorporated by the States. We hope to find as much consensus as possible, leaving the document with even more ambitious content.

The Chair of the Working Group has submitted a document that is bad in terms of content and was not handled in a transparent way. We have to pick up the discussion where we left off in 2021, with the strength of all States. Some of the States from the Global South have very convincing arguments, for a strong, ambitious and effective Treaty. This would includes obligations for corporations, the primacy of human rights over free trade agreements, and all the issues we have been presenting through the years.”

To listen to the audio version of this interview, click here. This interview was done by José Elosegui, Real World Radio coordinator.