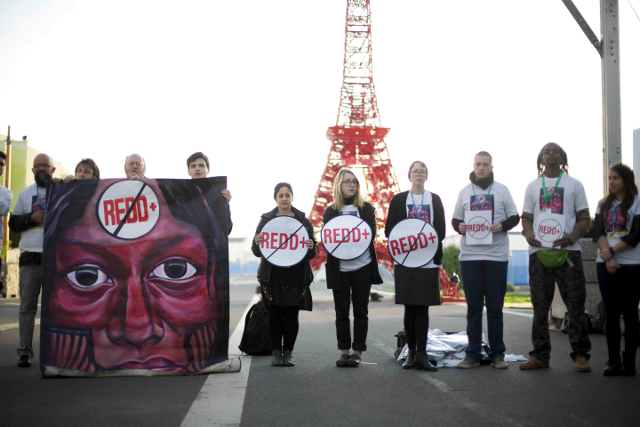 PARIS, FRANCE – At the foot of a miniature Eiffel Tower, civil society, environmentalists and Indigenous Peoples rejected REDD, a carbon market mechanism, land-grabbing false solution to climate change that could potentially cause genocide, at the World Climate Summit today.

According to Tom Goldtooth, Director of Indigenous Environmental Network, “Instead of cutting CO2 and greenhouse gas emissions, the UN, the US, the EU, China, Norway and climate criminals like BP, Total, Shell, Chevron, Air France and BHP Billiton are pushing a false solution to climate change called REDD (Reducing Emissions from Deforestation and Degradation). REDD is a carbon offset mechanism which privatizes the air that we breathe and uses forests, agriculture and water ecosystems in the Global South as sponges for industrialized countries’ pollution, instead of cutting emissions at source. REDD brings trees, soil, and nature into a commodity trading system that may result in the largest land grab in history. It steals your future, lets polluters off the hook and is a new form of colonialism. NO to Privatization of Nature!”

According to the No REDD in Africa Network, “REDD and all its variants are unjust mechanisms designed to usher in a new phase of colonization of the African continent. The REDD mechanism is a scam and the polluters know that they are buying the ‘right’ to pollute. Coming at a time when climate action has shifted away from legally binding requirements to voluntary, ‘intended nationally determined contributions,’ REDD provides a perfect space for polluters to keep polluting while claiming they are champions of climate action.”

“The worst form of slavery is to willingly offer yourself on the auction block, get bought and pretend you are free. This is what participation in the mechanism called REDD is,” said Nnimmo Bassey, co-director of the No REDD in Africa Network and recent winner of the Right Livelihood Award (the alternative Nobel Peace prize).

Since most of the world’s forests are in Indigenous Peoples’ territories, human rights activists are particularly concerned about the potential of REDD to cause genocide.

According to Casey Camp –Horinek of the Ponca Nations, “Yesterday’s genocide was done with guns and small pox. Now they are using carbon trading and REDD.”

According to the No REDD in Africa Network, in 2013 the Government of Kenya was getting “ready” for REDD in the Embobut Forest, now it is violently evicting the Sengwer People and forcing them “into extinction.” According to Survival International, “as many as a thousand homes have already been torched.” The Guardian has characterized the eviction against the Sengwer People as “scorched earth tactics.”

The Kenya Forest Service and Administration Police, a paramilitary unit of the police, has evicted some of the Sengwer, touting AK-47s not just from the Embobut Forest but from the entirety of the Cherangany Hills, destroying property and burning homes. “The government of Kenya is forcing us into extinction,” a Sengwer spokesman has said.

According to Isaac Rojas, Friends of the Earth International Forest and Biodiversity Program Coordinator, REDD is also a disaster for the environment. “Forests are not simply groups of trees and inert materials that can be reduced to ‘carbon stocks,’ commodities that can be traded on stock exchanges and markets.

REDD could also create adverse incentives for deforestation. As REDD offset credits are only supposed to be generated when deforestation or forest degradation has been avoided, governments and corporations are supposed to demonstrate that, at a given time, they were planning to log or clear certain areas of forest. It is thus in their interest to be able to maintain high levels of planned deforestation.”