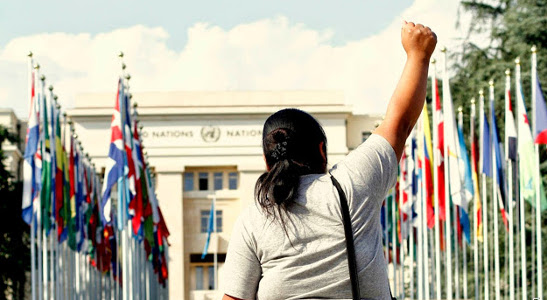 The resolution passed with twenty states in favor, fourteen (mostly European states) against and thirteen abstaining at the twenty sixth session of the UNHRC.

More than eighty nations and 500 organisations supported the  resolution, which could bring about a legally binding treaty on businesses and human rights.

Though the UNHRC and other organs of the UN have received abundant complaints about the actions of many TNCs outside of their home jurisdictions, the international organisation’s responses have been tragically inadequate. Existing UN human rights instruments expect TNCs to voluntarily self-regulate their human rights conduct. Needless to say, this approach has so far brought little to no reduction in human rights abuses.

Friends of the Earth International and many other civil society organisations have campaigned for decades for binding standards to hold corporations accountable where and when they commit environmental crimes and human right violations.

This week, for the first time in decades, a resolution on this very issue was voted on at a UN body. The resolution focuses on establishing a clear roadmap towards initiating an open-ended intergovernmental process of negotiations mandated to establish an international, legally-binding regime to hold corporations accountable for their human rights abuses.

The strongest opponents of the resolution were EU states, the US and Norway, which also actively lobbied other countries to side with them, threatening them with loss of development aid and foreign direct investment.

Defenders of the environment often face terrible consequences for their actions, suffering rights violations and violence: TNCs are often directly or indirectly involved in these rights violations.

A new case of violence against environmental rights defenders and violations of their rights is reported to Friends of the Earth International on average once a week, and this is just the tip of the iceberg.

Friends of the Earth International recorded more than 100 incidents of violence against environmental rights defenders and violations of their rights in twenty seven countries around the world in the period November 2011 – October 2013, according to our report ‘We defend the environment, we defend human rights‘.

Environmental defenders deserve and demand a legally binding treaty to bring corporations to justice. But they also demand community access to justice, the right to protest, reparation and restoration of damaged environments and livelihoods, and criminal liability for corporate offenders.

According to EU states and Norway, the longer we speak about the need for a binding treaty, the more companies are discouraged from taking voluntary action.

FoEI believes the opposite: the longer we delay a binding treaty, the longer companies will continue to act with impunity, and the more environmental defenders rights are abused.

This is why we will not stop lobbying the UN until the establishment of an international legally binding regime that will allow us to hold corporations accountable for their human rights abuses.