Skip to content
HomeNewsWhat is biodiversity and why is the CBD COP15 so important? 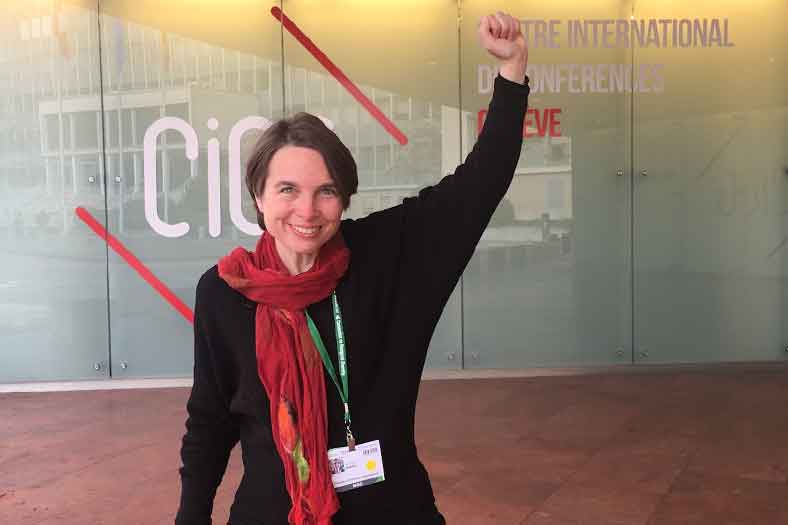 The United Nations Convention on Biological Diversity’s COP15 starts in Montreal on 7 December. Parties will negotiate and hopefully agree on a global framework that will define biodiversity policies for the next decade.

We interviewed Nele Marien, the forests and biodiversity programme coordinator at Friends of the Earth International, to find out why these biodiversity discussions are so important.

Biodiversity is life in all its forms. It’s central to Friends of the Earth International’s work. All life is interconnected; biodiversity is not about a single species or territory, but about all ecosystems and how within them, different species live and work together, and support each other, even if one kills the other. Every living thing is still part of the system. People are undermining these living systems and in doing so we are sabotaging life itself.

Many ecosystems are also indigenous territories, a fundamental point that is often lost today. Indigenous Peoples are part of the ecosystem living in harmony with nature – living as part of their territories not outside them. However nature is often erroneously considered to be devoid of people. It is something out there, where you go for a Sunday walk or on safari. This disconnect leads people to use and abuse nature. In fact biodiversity should be everywhere and permeate every aspect of people’s lives positively.

Are biodiversity and nature the same thing?
Biodiversity is nature. But the word ‘nature’ is often abused. Corporations claim that a shampoo or a monoculture tree plantation devoid of biodiversity are natural. For some people perfectly aligned trees in a plantation grid are beautiful, but it’s not natural. Nature is a messy living ecosystem, which sprawls and grows organically. The co-opting of the term nature is greenwashing, a corporate tactic used to justify the destruction of nature. For example corporations use the terms “Nature based solutions” and “Nature positive” in a positive way while doing nothing for or even destroying  biodiversity. This is dangerous. Friends of the Earth International is therefore cautious about using the term ‘nature’, especially in forums like the CBD. It is, after all, a Convention on Biodiversity, not Nature. Diversity is vital. We understand ‘nature’ in a sense which includes humans, and excludes any kind of process that manipulates biodiversity.

What is the current state of biodiversity?

Biodiversity is in crisis. The 2015 Planetary boundaries report which outlines the threats to the stability of our world and human life, indicates that biodiversity loss is a greater threat than the climate crisis. Due to human impacts, species loss is happening a thousand times quicker than the natural rate. The 2019 IPBES global assessment report found that one million species are at risk of extinction in the next thirty years. It’s not just about extinction, the genetic diversity and abundance of single species are being depleted at a terrifying rate. All this risks ecosystems as a whole, as interactions between different species are broken. Add climate change in the mix and the outlook for biodiversity is dire. For example, pine beetles reproduce faster due to climate change, destroying entire forests.

But industrial agriculture or agrocommodities have by far the worst effect on biodiversity.

A single crop species covers vast swathes of land, leaving them vulnerable to disease and so reliant on pesticides. Agroecology, on the other hand, allows for agricultural biodiversity in which species balance and protect one other.

The impacts of human settlements, infrastructure and mining are also hugely negative to  biodiversity.

Climate and Biodiversity
Recent focus on climate issues has resulted in a false belief that biodiversity will solve the problem, thanks to the carbon storage forests offer. Climate COPs call for more biodiversity to capture carbon so people and corporations can continue emitting, In reality, climate change undermines biodiversity. We need to approach both the climate and biodiversity crises in an integrated way and ensure that the solutions proposed work for both. Sadly this is far from the case at present.

What is so special about the UN Convention on Biological Diversity COP 15?

The CBD meeting in Montreal aims to define the Global Biodiversity Framework. This 2020-2030 biodiversity policy framework follows on from the 2010-2020 Aichi Targets agreed in Nagoya, Japan: a set of 20 targets which were good, but which have not been implemented.

Friends of the Earth International will be present, raising awareness of the dangers of concepts such as Nature Positive – a meaningless concept that allows for biodiversity destruction in one area as long as it’s restored elsewhere, often as biodiversity destructive tree plantations. This dangerous concept sits at the heart of the Global Biodiversity Framework.

We will also be calling for system change. Attempts to preserve the current economic model at the cost of biodiversity have to be eradicated from the CBD COP once and for all.

What are the possible challenges in Montreal?

The negotiation process has been a struggle, thanks to covid and a process which prevented countries from fully engaging with one another until very late in the process. Mainstreaming biodiversity will be a major stumbling block. This is a separate decision under discussion which outlines how biodiversity should be taken into account in all sectors- economic, agencies, companies, ministries, etc. If it is done well, it could change the way the world deals with biodiversity for the better. But the text was defined by a small commission, which was then heavily influenced by another group of mainly corporate actors. Governmental regulation is missing almost entirely. As a result this key text is now full of greenwashing proposals and false solutions- a true neoliberal proposal. There is unlikely to be enough time to discuss it in Montreal. The fear is that this text, which diminishes the impact of economic growth and corporate greed on biodiversity, could be agreed without discussion.

Indeed the growing influence of corporates in the CBD is a real worry. Their tactics include infiltrating delegations, paying to bring a certain vision and falsely claiming scientific backing. Most dangerous of all is the CBD and governments’ belief that corporations should be part of the discussion because they are the ones who need to change. Protecting biodiversity means limiting corporate greed.

What would a positive outcome to the negotiations look like?

We engage in the CBD because it has successfully defined a set of positive decisions over the years, which are helpful for Indigenous Peoples and for Civil Society in defending Biodiversity. We have to have hope for COP15.

Human rights, the rights of Indigenous Peoples and local communities and the rights of environmental defenders must appear in the main text – not in the largely ignored preamble. This is particularly relevant in text around  protected areas. The world needs areas that are mainly oriented towards preserving ecosystems. This must be created with proper governance, relying on the preservation of  the rights of Indigenous Peoples and local communities where applicable. Unfortunately many states and conservation NGOs want to exclude people from protected areas. But humans can interact positively with biodiversity and ecosystems, as exemplified for thousands of years by Indigenous Peoples. The best preserved ecosystems are the ones in which Indigenous Peoples live. Environmental defenders also require special recognition. We cannot save biodiversity without defending those who defend it. Social justice and environmental justice go hand in hand.

We also expect positive decisions on agroecology as the only plausible alternative to  agribusiness, limiting the corporate impacts on biodiversity, and other targets on pollution and species conservation.

A last word ahead of the CBD

Biodiversity is life. The CBD COP15 will decide policies to protect life or not. Be part of the fight to ensure they do!