Skip to content
HomeNewsA UN Treaty for Transnational Corporations and Human Rights: The next battlefield 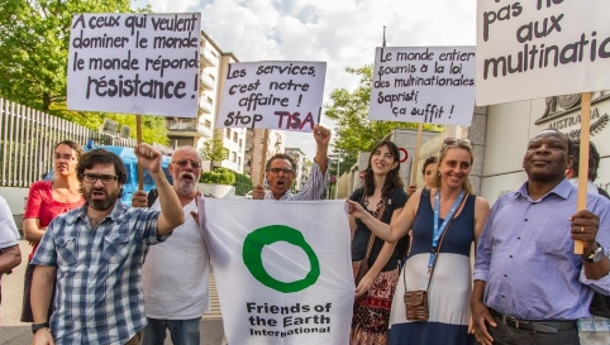 In July 2015 Friends of the Earth groups joined social movements and human rights networks from around the world for another Week of Mobilization in Geneva, calling for an international legally-binding instrument on transnational corporations (TNCs) and human rights.

The week resulted in a big step forward towards a UN Treaty. Member states in the new intergovernmental working group (IGWG) agreed a report and approved recommendations for moving the process forward.  The IGWG was established by resolution 26/9, approved in June 2014 at an historic session of the UN Human Rights Council (UNHRC).

Social movements and peoples affected by TNCs and their human rights violations (often associated with systematic and systemic environmental crimes) have been waiting for this move for decades.  The process opens new windows for civil society to reclaim states, to occupy the UN and to put peoples’ sovereignty and human rights above TNC impunity: Especially when a new wave of free trade and investment agreements – such as TPP, TTIP, CETA and TISA – need to be resisted to stop more TNC privileges and stem their power.

Those who think we have had enough corporate capture of the UN are now inspired to rethink how to make this new UN space a place to bring our struggles.

Corporations must remain the main target of this process and not the parties to the negotiations, precisely because the Treaty aims to overcome the lack of international law to control TNCs and to provide access to justice for those affected by their operations and human rights violations. In a context of escalating threats to environmental defenders, these gaps in international law must be urgently addressed. Space for negotiation at the IGWG must be reserved for UN member states and not opened as a catch-all multi-stakeholder dialogue. TNCs and their home countries’ attempts to undermine and divert the focus of the process have been easily exposed by groups such as Friends of the Earth.
In this first IGWG session, our role as civil society was to guarantee a wealth of proposals were presented on the content, scope and nature of the new treaty, as well as to bring the voices of affected people as actual experts on TNCs’ human rights violations. To mobilise pressure from the capitals was and is now crucial for the periods  between annual sessions of the IGWG until a treaty proposal goes to the UNHRC plenary for negotiation.

This links up to the processes of law making and campaigns against corporate control that Friends of the Earth members are leading at national levels, to push states to recognise their extraterritorial obligations on human rights and act accordingly, to develop meaningful policies to end TNC impunity and corporate capture of policy making spaces, to listen to peoples voices instead of corporations to deal with austerity measures of free trade agreements.

The historic victory we had last year has now turned into a new battlefield ahead for Friends of the Earth, to increasingly mobilize people to build sustainable societies and to dismantle corporate power. Let’s make it happen!