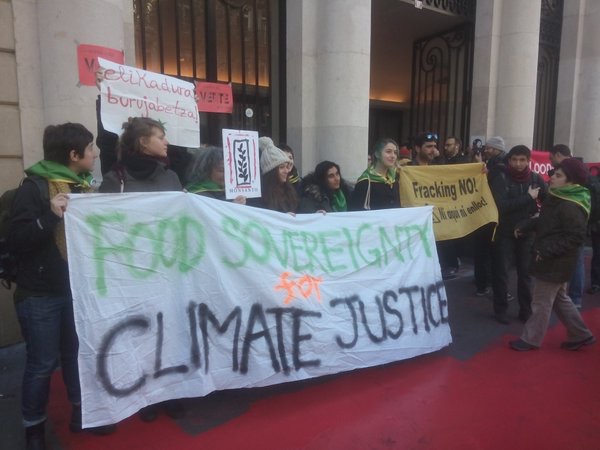 With another round of climate talks closing soon and a fair and just deal as far away as ever, civil society organizations ramped up their actions today, pushing a range of powerful demands and pointing to deep systemic problems with our energy, trade, and food systems. The red threads throughout were the shocking lack of justice in these climate talks and the deplorable involvement of polluting corporations in twisting climate deals to their ends, while greenwashing their climate-wrecking operations. Activists from Young Friends of the Earth Europe and Young Friends of the Earth France participated in many actions in solidarity with the front line communities that are facing direct impacts of climate change as well as the corporate capture of the fossil fuel industry.

ItTakesRoots, GGJalliance, Global Grass Roots Justice Alliance staged an action at a detention centre for refugees, calling for solidarity with refugees and highlighting the links with climate change.

Outside the Louvre, activists from Art Not Oil (UK), BP or Not BP? (UK), G.U.L.F. (US), Liberate Tate (UK), Not An Alternative (US), Occupy Museums (US), Platform London (UK), Science Unstained (UK), Shell Out Sounds (UK), Stopp Oljesponssing av Norsk Kulturliv grabbed headlines as they denounced Total and ENI’s sponsorship of the world famous museum.

La Via Campesina staged a strong action calling for food sovereignty and climate justice in front of the Danone Group building in Paris.

In the ‘Climate Generations’ space next to the conference halls where the climate talks are taking place, youth-led civil society groups gathered for songs, spoken word, and stories focused on youth leadership and the rejection of hydraulic fracturing (fracking).

Meanwhile, a group of cyclists from Young Friends of the Earth Ireland continued their “Pedaling for Paris’ action, through Cherbourg as they made their way to the French capital.

Visitors to the conference centre where the talks are taking place may have been surprised to discover copies of the IPCC’s (Intergovernmental Panel on Climate Change) report in toilet roll dispensers in the bathrooms. This wonderful piece of creativity was unleashed by the appropriately named giveashit.nu, as ‘the perfect toilet read’ for world leaders, who clearly need to pay more attention to the science.

Text contributions by Young Friends of the Earth Europe