Skip to content
HomeNewsDoes it take a natural disaster to make us better people and change the way we live on this planet? 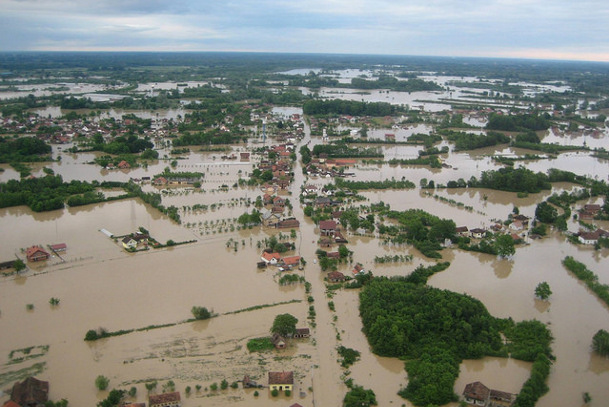 by Jagoda Munic, chairperson of Friends of the Earth International

Climate change has hit the headlines again in recent days. Last week scientists warned that the collapse of the Western Antarctica ice sheet is already under way, which could eventually lead to sea levels rising by up to four meters and dramatic and hugely damaging impacts on our coast lines and the way we live our lives.

This week, my part of the world, the Balkans, has been in the spotlight, as devastating rainfall has battered the region, bringing death, destruction and chaos. We experienced three months’ worth of rain in just three days, leading to heavy floods in Bosnia, Serbia and Croatia, flooding an area greater in size than the whole of Wales .

The flooding has dominated our news and social media, where friends and families have shared their pictures and experiences of the devastation they are experiencing. Bosnia and Herzegovina, appears to be the worst hit, with numerous landslides destroying houses and roads and even moving minefields left over from the war in the 1990s.

Donations were quickly collected over the weekend, often via social media, and sent to affected communities. Twenty years after the Balkan war, people have shown remarkable solidarity with each other, with many asking why it has taken a natural catastrophe to bring out our humanity. As one of my friends said “once this disaster is over, let’s not forget how good we can be”. The spirit of the affected people has been inspirational. It doesn’t matter that they lost all they had in the flood, as long as they manage to survive. And many people here know what it’s like to start from scratch.

This spirit of neighbourliness has also been demonstrated by Balkan countries at state level, with neighbouring governments sending help and support across their borders.

But unfortunately our nations have not connected the dots and are doing precious little to tackle climate change. Indeed, all the governments in the region are keenly pushing for new coal power plants. Most of this new energy production is earmarked for export to high-consuming European countries, not local consumption. Renewable community energy projects are practically non-existent.

Of course, the flooding is not an isolated incident. With communities across the world frequently battling the consequences of more extreme weather, such as floods and droughts, it’s time for our governments and the international community to take these issues seriously. We must divest from fossil fuels, particularly coal. We need to cut down our energy use too, as well as eliminating the vast inequality in consumption among rich and poor.

Building a low-carbon future is certainly achievable, but to do this our global society has to change starting right now.

Rethinking and restructuring our society and economy is actually much easier than trying to survive devastating climate change and the floods, tornadoes, forest fires and pressure on agriculture they bring.  High-tech advancements towards renewable energy solutions or carbon neutral travel and transportation models are of great help, but they are not enough.

If we want to build a sustainable society we cannot continue with our current consumption-based economic model. Our current economic system is damaging to both our environment and our society and is leading to global disaster. If we don’t change soon, this may become a matter of basic survival.