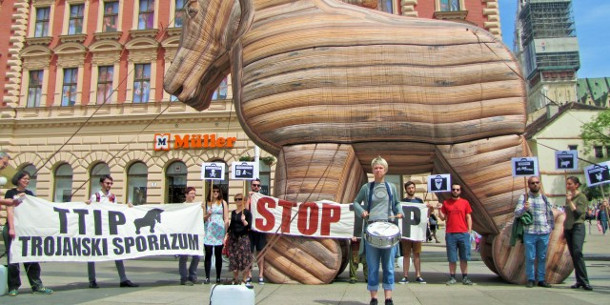 The European Parliament committee for international trade failed European citizens and the environment in a crucial vote on a proposed resolution on the Transatlantic Trade and Investment Partnership, Friends of the Earth Europe has claimed. The draft resolution – which is to be debated in plenary on 10 June – is the unique opportunity for the European Parliament to give its opinion on the on-going trade talks between the EU and the US.

Friends of the Earth Europe condemned the outcome of the vote as a weak resolution failing to draw clear red lines on some of the biggest dangers of the proposed trade deal. There has been growing public outcry at the ongoing negotiations.

Natacha Cingotti, trade campaigner at Friends of the Earth Europe said: “The European Parliament trade committee turned its back on European citizens today, by failing to take a clear stance against the on-going transatlantic trade negotiations. Strong public concerns on key aspects of the talks, such as the planned inclusion of an investor-state dispute settlement mechanism, or attacks on legislators’ ability to regulate in the public interest through regulatory cooperation, have only been partially acknowledged.”

The TTIP negotiations have been described as a Trojan horse for powerful corporate interests, which are already using the talks to weaken and delay upcoming European legislation in the public interest. In particular, the planned inclusion of provisions such as investor-state dispute settlement or permanent regulatory cooperation would greatly empower industry lobby groups, while dangerously limiting the ability of legislators to regulate in key areas of citizens’ everyday life – from the banning of toxic chemicals to financial regulation, or measures to prevent climate change.

Natacha Cingotti continued: “We call on the plenary of the European Parliament to oppose this Trojan horse treaty by rejecting the resolution. MEPs should stand with European citizens, not with the corporate-led agenda of the transatlantic negotiations that are a threat to our societies and our environment.”

Resistance against TTIP has grown rapidly across Europe in recent months. More than 1.9 million people have signed a self-organised European Citizens’ Initiative calling on EU decision-makers to stop the TTIP negotiations and to not ratify the EU-Canada trade deal (CETA), and no less than 97% of the respondents to the European Commission’s own consultation on investor-state dispute settlement have rejected special rights for investors.