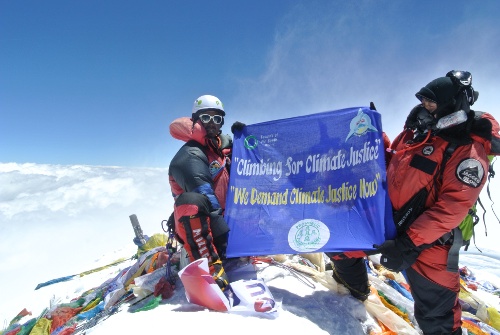 The Climbing for Climate Justice Everest expedition – organised by the Save the Himalayas Campaign and Khangri Media, in collaboration with Friends of the Earth Nepal / Pro Public – successfully climbed Mt. Everest on May 20 to demand climate justice from the top of the world.

The team returned to Kathmandu and held a press conference on May 25, 2013.

Sudarshan Gautam – a Nepal-born Canadian resident who has no arms – has just become the first person with no arms or prosthetic limbs to climb Mt Everest. He told the media that he saw how climate change is affecting the Himalayas, and stated that “Mount Everest has lost most of its glacier and now largely looks like a big black rock.” He urged the world community to reduce greenhouse gas emissions immediately.

Pemba Dorje Sherpa – who holds the world record for climbing Mount Everest in the fastest time and has set four World Records climbing Mt. Everest – said that it has become easier to reach the top due to climate change as there is less and less snow on Mt Everest. “You can get to camp 3 just using sports shoes these days,” he said.

Prakash Mani Sharma, Director of Friends of the Earth Nepal congratulated expedition members and thanked them for their effort to raise awareness of climate justice.

“Nepal is highly vulnerable to the impacts of climate change and the people of Nepal are already suffering its consequences. Himalayan glaciers are melting rapidly and the risks of glacial lake outburst floods have significantly increased. There are more than 40 glacial lakes at risk of bursting. Outburst floods have catastrophic impacts on the life and property of the thousands of people residing downstream of those lakes,” warned Prakash Mani Sharma.

Two expedition members, Kapur Shrestha, and Min Bahadur Sherchan, 82, could not reach the top with the expedition and decided to attempt the climb separately, but were ultimately prevented from reaching the summit.

Nepali climber Min Bahadur Sherchan, 82, was aiming to become the oldest man to summit the mountain, a record he held for five years, until May 22, 2013, when 80 year old Yuichiro Miura from Japan summited the world’s highest peak.

You can read more about the expedition in our press release and more on the rivalry between these octogenarian climbers in this article by Associated Press.