Skip to content
HomeNewsFinancial Mechanisms in the CBD: Opening the Doors to More Privatization of Biodiversity 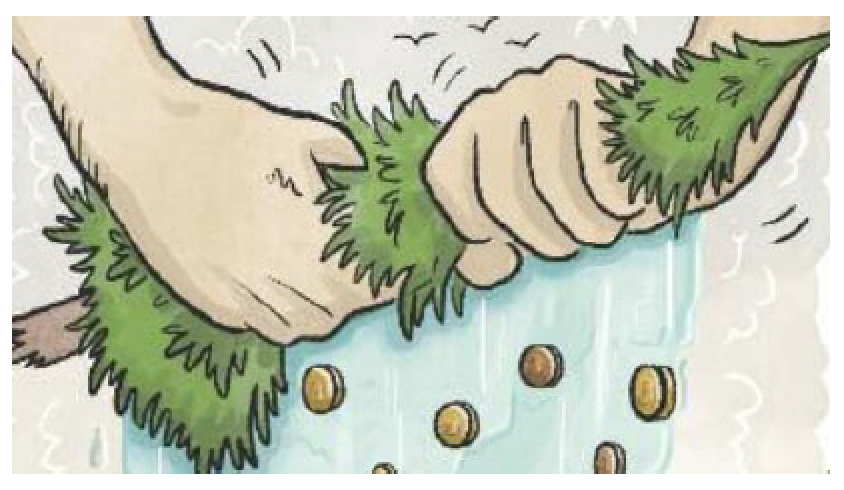 The CBD is a forum where organizations and movements can bring our positions and try to get them reflected in official documents. We do not believe the world will be changed at COP meetings (gatherings of CBD member governments), other CBD meetings, or any other United Nations Convention. It is a working space complementary to the daily work of resistance, mobilization, and transformation that we are doing at the grassroots level, together with local communities and Indigenous Peoples.

It is important to note that the CBD, like any other United Nations institution, does not reject, but rather embraces, what the United Nations Environment Programme (UNEP) calls the green economy. This economy does not challenge the power dynamics that cause, for example: inequalities, corporate control, concentration of power and highly destructive and polluting production. Rather, the green economy legitimizes such dynamics, claiming that a few “corrections” would suffice for the current model to continue working. According to this logic, if one invests in biodiversity protection (READ: opens new businesses), the conditions are created for said investment to incorporate environmental and social criteria. Additionally, an economic value—and a price—are placed on “environmental assets,” and we see Nature not for what it is, but as “natural capital.” The dominant model would continue to function, only now painted green and creating new businesses.

The CBD has opened the door to green economy instruments through discussions on what is now known as financing for biodiversity—that is, the funds needed to protect biodiversity. The claim is that a large amount of money is needed to conserve it, since biodiversity is being lost at in increasingly accelerating and worrying pace. While there are many causes, the dominant discourse emphasizes the fact that since biodiversity is part of the commons, nobody protects it. Furthermore, countries that contain this biodiversity (primarily in the South) do not have the financial resources to protect it; meanwhile, industrialized countries contribute less and less funding, despite of their international obligations in this area of finance. Hence, the private sector came to mind, but the private sector is not willing to finance if it does not receive a “return” on its investment. Therefore, it is necessary to find new financial mechanisms—some market-based—which enable this financing and new profits. This is one of the prevailing premises of the CBD and other spaces.

The CBD considers these kinds of financial mechanisms to be “innovative.” But that view is not universally shared, and these new mechanisms generated opposition because they are market-based mechanisms. At COP 12, people began to refer to these are financial mechanisms for biodiversity. (2) The CBD makes reference to six kinds of innovative financial mechanisms, of which the following stand out: environmental fiscal reform, payment for environmental services and biodiversity offsets. The CBD-created, “High-Level Panel on Global Assessment of Resources for Implementing the Strategic Plan for Biodiversity 2011-2020,” adds others to this list, including tradable permits and offsets. Several of these mechanisms pave the way for new businesses to generate significant economic resources, benefitting the very companies responsible for the destruction. Thus, instead of solving the underlying problem of biodiversity loss, they instead accelerate it. Furthermore, the idea of offsetting damages related to biodiversity is absurd and perverse, given the unique character of any species or ecosystem. (see also WRM Bulletins 198 and 181).

Those who embrace the green economy and promote these kinds of mechanisms claim that they will be successful once biodiversity has an economic value placed on it; since without it, there can be neither prices nor business. The Aichi Goals (1, 2 and 20) (3) uphold the importance of economic value, which in real life is very difficult to separate from price. Pricing enables the Financialization of Nature (FN), new way to privatize Nature, as well as the means of existence and livelihood of numerous local communities and Indigenous Peoples who live in, exist and depend on it. FN is also trying to replace national and international legislation with payments; those who have financial resources prefer to pay for the damage they create rather than abide by laws that include sanctions. FN is always introduced—in pilot projects, instruments or politics—as something very technical and complex; in so doing, its promoters try to cover up the fact that it represents a different worldview than the one we have in communities, movements and organizations that work for social justice. By presenting it in this way, FN promoters obscure the discussion on the power relations that have caused the current environmental crisis, and the responsibilities for creating it. It is necessary to address both of these aspects in order to find real, long-term solutions to overcome the climate crisis.

Due to social movements’ and some governments’ strong rejection of the “innovative” financial mechanisms, there is no explicit reference to them in the agenda of the COP 13 in Cancún, Mexico. We have observed, rather, that every time they face criticism, promoters of these mechanisms try to disguise them by changing their names and incorporating them into other discussions. We have observed this with the concept of innovative financial mechanisms. (1) For now, proposals within the framework of FN have gained space in discussions on more general subjects, but this is not the case for each specific instrument and its conversion into a CBD-recommended policy. Nonetheless, organizations and social movements are on the alert, since these kinds of mechanisms will surely be promoted in the halls and parallel events at the next COP. In the face of this promotion, we must act to stop it.

After being discussed, negotiated and approved during the COP, proposed recommendations become the COP decisions. These recommendations are negotiated in previous meetings. Our analysis of the recommendations to be discussed during the next COP reveals there are references to financial mechanisms, such as REDD (2). We also find a resolution on restoration (4), which discusses developing accounting processes “that take into account the values of natural and semi-natural ecosystems and the functions and services they offer.” Some countries that are part of the Biofin Initiative are already practicing this idea; (5) by including nature into national accounting systems, they put a price on it, which allows for the establishment of markets, pollution quotas, tradable permits and offsets.

Lastly, we find biodiversity incorporated in all sectors. The host government of the COP has even chosen it as the central theme of the meeting. (6, 7) By incorporation, this means the inclusion or integration of conservation-related actions and the sustainable use of biodiversity in productive sector strategies. (8) We also observe that incorporating biodiversity is a way to generate resources, as it could facilitate the use of offset mechanisms or create green markets. (9) The proposed resolution discusses the need to account for ecosystems and ecosystem services, and suggests that incorporating biodiversity helps generate recourses. From paragraphs 70 to 81, there is an ode to the business sector. The parties are invited to encourage the business sector to generate and evaluate information on its impacts, and to use offsets and other mechanisms, such as natural capital protocols. In short, at no point does it mention determining responsibilities, applying sanctions, or eliminating any kind of activity that destroys biodiversity.

The prevailing logic is to encourage voluntary measures and to utilize mechanisms that favour the creation of more businesses. It is similar to the logic that sustains the FN, serving to perpetuate the causes of biodiversity erosion and loss. The CBD is missing a great opportunity to incorporate biodiversity in all sectors, in such a way that structural changes would ensure its survival and recovery.

It is necessary for social movements and the State to definitively attack the causes of biodiversity loss and degradation. At the heart of these struggles is the defense of community territory, culture and identity as the key to strengthening local initiatives. Around the world, local communities and movements are developing thousands of initiatives that we must strengthen. One of these is food sovereignty—based on diverse systems managed by farmers and indigenous groups, in which they produce food and other goods for local markets. Thus, it is vital to fight for land to be in the hands of small-scale famers and Indigenous Peoples, because food sovereignty is impossible without control of the land. We must continue to strengthen communities’ and Indigenous Peoples’ control of forests and biodiversity through community governance proposals. As our research of concrete experiences has shown, community forest governance is a proposal that protects, conserves and improves biodiversity; it strengthens historical and collective rights, favours community control and guards against deforestation—thus making it a real solution in the fight against climate change. It is equally important to strengthen local markets as a tool to reduce consumerism and support local economies. These in turn help improve equity and create many jobs with dignity, in contrast to the actions of transnational corporations. In many of these proposals it would be enough for the State merely to reassign where resources go, instead of initiating discussions and proposals for new financial mechanisms.

As an international space where many of these proposals are discussed, the CBD must steer clear of false solutions. It must respect its founding principles. It must respect and more strongly promote the rights of local communities and Indigenous Peoples. The CBD should not favour financial mechanisms involving false solutions. The perverse logic of paying to continue polluting perpetuates the causes of biodiversity degradation and destruction, and must be eradicated from all proposals. The financial resources exist, as does polluters’ historical obligation to provide them, since they have caused this destruction through their development models.

(1) More information in this brochure: Financialization of nature: Creating a new definition of nature. https://www.foei.org/resources/publications/publications-by-subject/forests-and-biodiversity-publications/financialization-of-nature
(2) There are two references to REDD (program for Reducing Emissions from Deforestation and Degradation): One in the recommendation on climate change that comes from SBSTTA 20 (in item XX/10), and in the next line there is a reference to alternative proposals. We see the same in the resolution proposed by the SBSTTA 19 (item XIX/8 in point 4, paragraph 3).
(3) The Aichi Goals, approved at COP 10, provide a road map for biodiversity conservation and seek to halt biodiversity destruction.
(4) Proposed resolution from the SBSTTA 20 (in item XX/12, paragraph 14, point 6).
(5) According to the UNDP, the Biodiversity Finance Initiative (BIOFIN ) “aims to […] improve cost-effectiveness through mainstreaming of biodiversity into national development and sectoral planning, and to develop comprehensive national resource mobilising strategies.” www.biodiversityfinance.net/
(6) Matter discussed in both SBSTTA 20 and SBI 1 (SBSTTA 20, point XX/15, and further developed by SBI draft resolution 1/4).
(7) TWN Info Service on Biodiversity and Traditional Knowledge, 12 October 2012. North-South divide on resource mobilization. http://www.twn.my/title2/biotk/2012/biotk121003.htm
(8) GEF, UNEP, CBD; Mainstreaming Biodiversity into Sectoral and Cross-Sectoral Strategies, Plans and Programmes Module B-3, Version 1 – July 2007.
(9) Finance Mechanisms for Biodiversity: Examining Opportunities and Challenges. Co – Chairs Summary of an International Workshop convened by the OECD, World Bank, GEF, and the European Commission, together with Sweden and India, 12 May 2012 – Montreal, Canada.