Skip to content
HomeNewsFocus on: Friends of the Earth Mozambique/Justiçia Ambiental! 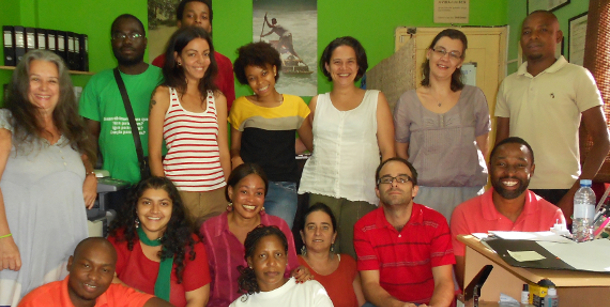 ‘Justiça Ambiental’ (JA!) means environmental justice, while ‘JA’ means ‘now’, in Portuguese. JA! was formally registered in 2004, but founded in the late 1990s by a group of friends who were concerned about the manner in which Mozambique was developing in the unregulated global economy. In particular, we were concerned that our leaders were uncritically adopting a pattern of destructive foreign-investment-driven industrial development.

In August 2012, we joined hundreds of people from across southern Africa to turn the beautiful coastline of Maputo into a sea of green t-shirts. As Maputo hosted the SADC (Southern African Development Community) Summit, the people decided to respond by taking to the streets and marching for their rights. Activists from social movements and organizations in Mozambique, South Africa, Lesotho, Malawi, Namibia, Zambia and Zimbabwe, also participated in the Peoples’ Summit of the SADC 2012, which brought together farmers, fisherfolk, landless peoples, rural and industrial workers, rural women, feminist movements and social and environmental activists.

In September, we organised a workshop in Maputo on our community forest management project in Zambezia province in central Mozambique, together with community members. Although our funding for this project ended at the end of 2012, we are still committed to working with one of the communities to continue their project.

In October 2012, we also co-organised a big public meeting in Cateme in Tete province in central Mozambique, where most of the communities displaced by the Vale coal mine have been resettled. About 200 community people attended. We presented the Land law, the constitution and other important legal information to the community. Then the people spoke out vocally about their problems. After we returned to Maputo, we sent a letter to the President of Mozambique raising the concerns of the Vale-displaced communities.

On an earlier field trip to the Vale coal mine-displaced communities in Cateme, Tete province, we were also joined by a German photographer, Gregor Zielke. His work ‘Promised Land’ has since been featured in the Guardian.

Later the same month, we held a workshop in Maputo on ‘Corporate Responsibility’, which was, of course, really a ‘Corporate Abuse’ workshop, because of the appalling cases presented. Over 60 people attended the workshop, including government representatives and community people from Niassa, Cabo Delgado and other provinces of Mozambique. We also invited Ben Powless from the Indigenous Environmental Network in Canada and Nely Alexandra from Oilwatch in Ecuador. They brought experiences of solidarity and explained how all mining is unsustainable.

The day before the Corporate Responsibility workshop, we also held a gathering with journalists from across Mozambique. Journalists are also being targeted and are fearful of writing the truth. Hence we plan to continue interacting with them and giving them support to publish the facts.

We held another workshop on Corporate Responsibility in Pemba, in the far north of Mozambique, where oil and gas exploration have already harmed local communities and the environment. We are now preparing to launch a publication detailing at least four of cases.

On 10 December, International Human Rights Day, our staff and board partnered in a march to commemorate the day, co-organised by Liga dos Direitos Humanos (Human Rights League) in Mozambique, and others. Suddenly, the marchers were stopped by the Rapid Intervention Force police, dressed in full riot gear, with a tank in the middle of the street! We had received permission to hold the march and to deliver a petition to the Parliament on the human rights situation in Mozambique. The only reasonable explanation for this extreme reaction by the government and the police is that it was an intimidation tactic. Civil society in Mozambique is small but getting more vocal. Communities are raising their voices against oppression, and this is threatening the state’s plans for more greed and unsustainable development. But our message to the state is clear: we will continue to speak out against injustice.

In December the ‘Dirty Profits’ report was released in Germany by our partner organisation, Facing Finance. JA!’s Samuel Mondlane contributed articles to the report, which exposes corporate abuse from Vale’s coal mining, the Mozal aluminium smelter, and oil and gas exploration by Anadarko and ENI off Mozambique’s northern coast. Samuel also travelled to Germany for the report’s release.

We also partnered with the Jubilee Debt Campaign to release a report, ‘Whose Development is it?’, which investigates the BHP Billington-owned Mozal aluminium smelter.

Today our volunteer Board consists of Anabela (Director), Mauro (Deputy Director) and Carlos (Treasurer). In total, we have about 15 staff and volunteers, including Daniel, Janice, Gizela, Morais, Samuel, Vanessa, Jeremias, Rene, Silvia, Margarida, Vicente and Dipti. Besides the staff, we started with 10 founder members in 2004 and today we have 14 members.

Find out more on their website ‘Justiça Ambiental’ (JA!)