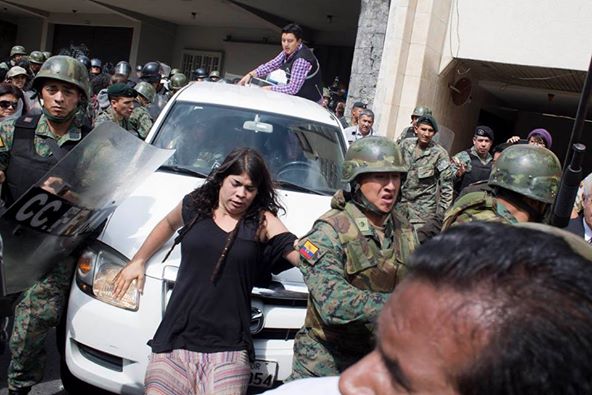 December 9th is gender day here at the UN climate talks, in Lima, Peru. This is the third year that the UN negotiations have included this day, which aims to raise awareness of the importance of gender considerations and celebrate women’s leadership in fighting the climate crisis. Any response to climate change needs to include provisions that are equitable and fair to women, and to make sure that ongoing efforts to protect and empower women are not undermined.

Climate change contributes to crop failure, flooding and lost livelihoods, increasing the burden of tending to the sick and elderly, domestic, farming and food preparation work that falls on women in much of the world.  Women are typically more affected by poverty, food and water shortages, which are all worsening because of climate change. Social and political instability – likely to occur where catastrophic weather is abundant and food and work are scarce – increase women’s vulnerability to violence and poverty.

We must celebrate the invaluable leadership roles women play in the response to climate change, despite being underrepresented in decision making, and recognize that they often take great risks to stand up for their communities and our shared environment. Whether they are protesting against dirty energy projects or fighting against fracking, or fighting to protect rain forests from oil exploration women frequently face government persecution, arrest, and threats for their crucial activism in the fight against climate change.

Any future climate agreement  must also honestly and seriously include measures to ensure that climate change does not multiply the threats that multiply women’s vulnerability to violence. At least one in three women worldwide has experienced some form of violence. Where fuel, food and water are scarce women must walk further – often in remote, isolated or poorly-lit areas – to access these necessities, increasing their vulnerability to violence. Where conflicts, wars and natural disasters force people to move in large numbers, it is women who are most at risk of opportunistic assault. The likelihood of increased violence against women demands that world governments take serious action on climate change, work to urgently reduce emissions, and mobilize the resources needed to manage the impacts and end poverty. We are calling not only for gender equality, but for  justice for all people.

We express our solidarity with our sisters around the world who are fighting for sustainable societies, and living in dignity and harmony with nature. Indeed, the causes of violence against women, and violence against nature are the same – both come from a system based on domination, exploitation and hierarchy. Let’s change this system!