Skip to content
HomeNewsJoin the Global Frackdown for a Ban on Fracking! 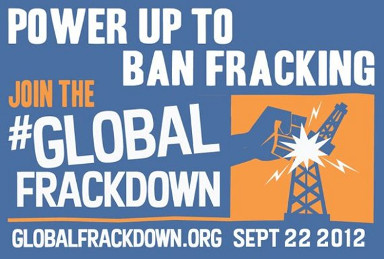 Friends of the Earth International is supporting Global Frackdown, a mass global day of action on Saturday, September 22 demanding a ban on fracking around the world.

Fracking is a relatively new and highly destructive way of extracting oil or gas from the ground. It involves injecting millions of gallons of water mixed with sand and chemicals into hard shale rocks at high pressure to release the gas or oil that is trapped inside.

Gas from fracking (known as ‘shale gas’) is being promoted as ‘clean energy’, but the reality is very different. Fracking threatens our air, water, communities and climate. Fracking:

Fracking is just one aspect of the corporate-controlled global dirty energy system which we need to transform if we are to avert catastrophic climate change and improve the health, wellbeing and livelihoods of communities around the world. Dirty fossil fuels like oil, gas and coal, and other dirty energies like agrofuels and energy from destructive mega-dams and waste incineration harm communities and the environment whilst mostly serving the energy needs of corporations, not ordinary people.

We need to replace this unsustainable and exploitative energy model with energy systems based on appropriate, clean, renewable energy under real democratic and community control.

This transformation is already under way, and Friends of the Earth International is campaigning to help make it a reality. One of the first steps is stopping dirty energy, and that is why we are supporting Global Frackdown, an initiative of Food & Water Watch.

Around the world hundreds of communities are organising to protect their land and water and resist fracking. Communities and campaigners have managed to stop fracking in Bulgaria and France. Campaigners in South Africa won a temporary moratorium, but saw this lifted last week showing that more pressure and global solidarity is needed.

Global Frackdown will unite concerned citizens everywhere for a day of action on September 22, 2012.

Over 125 actions are being planned all over the world to demand that decision makers oppose fracking and send a message to governments that we want a future fueled by clean, renewable energy, not dirty, polluting fossil fuels. For more information www.globalfrackdown.org