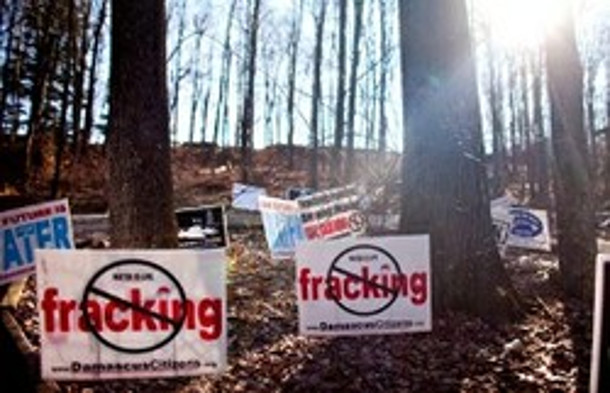 Milieudefensie / Friends of the Earth Netherlands calls on Shell to break off a shale gas deal with Ukraine because of environmental damage and strong suspicions of corruption.

For the last several months, Milieudefensie and its sister organisation Zelenyi Svit / Friends of the Earth Ukraine have been researching the environmental impact of Shell’s shale gas activities in Ukraine. This study shows that Shell is using harmful techniques in drilling for shale gas (1) that would be illegal in the Netherlands; polluted fracking water is being dumped into open reservoirs. In 2013, Shell entered into the deal with recently ousted President Viktor Yanukovych, representing Ukraine and the Ukrainian company Nadra Yuzivska. This happened in the presence of Dutch Prime Minister Mark Rutte (2).

Geert Ritsema, head of the energy and natural resources campaign at Milieudefensie: ‘Shell must withdraw its agreement with the Ukrainian state now that Yanukovych has been removed. The Ukrainian people never assented to shale gas. Ukrainians are being doubly penalised by Shell: the environment is being polluted as Shell is dumping toxic waste water into open reservoirs and it also seems that Nadra Yuzivska is being used to funnel money to Yanukovych and his supporters.’

Shell entered into the USD 10 billion shale gas deal with the Ukrainian government and the Nadra Yuzivska LLC company in Davos in January 2013. Nadra Yuzivska LLC receives half of the profits and 90 per cent of the company is owned by the state. 10 Per cent of this company, however, is in the hands of a small shadowy company (3) that has frequently been linked by the Ukrainian media to the Yanukovych faction. There are strong suspicions that the company serves as a cover to channel funds to the Yanukovych family (4).

In recent months, Milieudefensie and Friends of the Earth Ukraine investigated Shell’s drilling locations (5). They discovered that polluted drilling liquid and fracking water are being stored in open-air reservoirs, which are separated from the underlying ground by only a layer of plastic. The water in these reservoirs contains fracking chemicals and toxins such as heavy metals, volatile organic compounds and radioactive materials, which occur naturally deep underground. These substances are harmful to health when they get into groundwater or evaporate from the reservoirs into the air.

Geert Ritsema: ‘Shell employs a double standard and would rather drill for shale gas in countries where regulations and enforcement are not as strict. It is unacceptable that a Dutch company such as Shell – which wouldn’t dare to risk getting involved with shale gas in the Netherlands – can use these harmful and dangerous techniques in other countries.’

In Ukraine, just as in the Netherlands, people’s objections to shale gas are increasing, based on the dangers of groundwater pollution, earthquakes and the impact on the landscape. Pavlo Khazan, campaign leader at Friends of the Earth Ukraine: ‘The Ukrainian people have never agreed to shale gas. A number of municipalities have declared themselves ‘shale gas free’. Now that Yanukovych has been ousted by the Ukrainian people, a new government must immediately end this contract with Shell.’

In the time to come, Milieudefensie will be investigating Shell’s shale gas activities in Ukraine, Argentina and South Africa. Together with sister organisations in the Friends of the Earth network we will try – just as in the Netherlands – to prevent or to stop drilling, to call on Shell to honour its responsibilities and to call on governments to make greater efforts toward clean energy.

For more details about our investigation in Ukraine, video material of the open reservoirs, interviews with local residents, and for more information about our national and international shale gas campaign, please contact our press office: +31 (0)20-5507333, persvoorlichting@milieudefensie.nl

(1) Communications about Shell’s activities in Ukraine, such as in the media, always refer to shale gas; strictly speaking, however, it is not shale gas but tight gas that is referred to. This is gas that is trapped in compacted sandstone instead of slate (shale). The method of extraction, in which fracking takes place deep underground by pumping in highly pressurised water and chemicals, is for the most part the same as is done with shale gas and thus the risks and impact on the surroundings are comparable.

(2)  News item 24 January 2014: ‘Ukraine and Shell sign $10bn shale gas deal’ www.bbc.co.uk/news/world-europe-21191164
In addition to the deal made in Davos in January 2013, Shell also has a partnership agreement with the Ukrainian gas company Ukrgazvydobuvannya for unconventional gas extraction in the same region. More information on both partnership agreements can be found on Shell’s Ukrainian website (in Ukrainian): www.shell.ua/aboutshell/our-business-tpkg/onshore/where-we-operate.html

(4) News items on the links between Yanukovych and Nadra Yuzivska LLC:

(5) Shell has a permit to drill for shale gas in an area of nearly 8,000 square kilometers between the cities of Kharkov and Donetsk in eastern Ukraine. The first drilling was done at the end of 2013, and is now taking place at the second location. Images of the two drilling locations (Belyaevsky-400 near the village of Vesele and Novo Mechebylivska-100 near the village of Alisivka ) can be requested from Milieudefensie.  Shell plans to carry out drilling in ten locations in 2014 and start commercial shale gas extraction in Ukraine in 2015 (news item 27 January 2014: ‘Ukraine’s cooperation with Shell expanded’).

(7) Methane is a greenhouse gas that is 83 times as powerful as CO2 for the first 20 years. In the Environmental Impact Report for the Belyaesvska-400 drilling location, Shell stated that the methane emissions during the fracking phase would be 15.7 tonnes (Table 4.2.18 line 7, column 7 p. 54 http://s04.static-shell.com/content/dam/shell-new/local/country/ukr/downloads/pdf/update20130830/obhc-b400.pdf). A study on comparable shale gas wells in the US with both open reservoirs and sealed storage tanks including methane capturing installations (Allen et al. 2013) shows that average emissions in the fracking phase is 1.7 tonnes of methane. The lowest measured emission in that study was 0.04 tonnes of methane, with the use of the best available techniques such as also required by the European shale gas guidelines. Methane emissions at Belyaesvska-400 are thus nearly 400 times higher than permitted European limits.