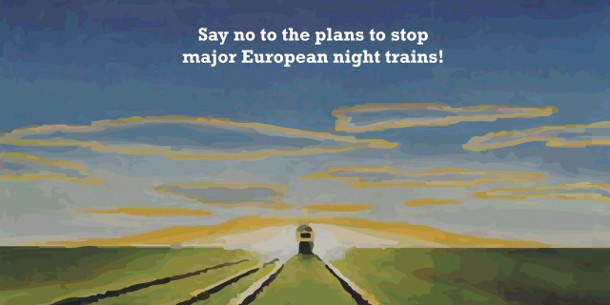 A one-way night train journey between London and Berlin releases 7.6kg of carbon dioxide emissions, compared to 180kg by car and 126.5kg by plane, but as of the end of 2014, the German national rail operator Deutsche Bahn and its partners are planning to end many of the iconic and climate-friendly night train services, leaving many people with little choice but to fly or drive.

The German national rail operator Deutsche Bahn and its partners have announced an end to iconic and climate-friendly night trains running from Copenhagen to Amsterdam, Basel and Prague, as well as services between Paris and Berlin, Hamburg and Munich at the end of December, 2014.

These journeys represent a huge area of northern and central Europe that would immediately become inaccessible via train for those unable or unwilling to take an entire day to make the same journey – likely shifting passengers towards flying or driving.

The climate impacts are stark: a one-way night train journey between London and Berlin releases 7.6kg of carbon dioxide emissions, compared to 180kg by car and 126.5kg by plane.

Resistance is beginning to grow. The issue has been debated in the German parliament, protestors have demonstrated outside Deutsche Bahn’s headquarters, and the issue has attracted some media attention. On Sunday November 2nd, the night of the last night train out of Copenhagen, NOAH/Friends of the Earth Denmark will protest at three stations across the city.

By targeting the train companies involved directly, the email campaign aims to put pressure on Deutsche Bahn and other train operators to halt or postpone the closure of the night trains. If they stop running in December, Jordens Vänner/Friends of the Earth Sweden will try to put pressure on operators and politicians to restart the connections again before the summer, when hundreds of thousands of passengers use these trains.

“Whether we win or not in December, the strength of this and other reactions can determine the future of the night trains in Europe” said Lars Igeland of Friends of the Earth Sweden/Jordens Vänner.

Please help spread this email action – together, we can keep Europe’s night trains on track.