“Fuelling the Fire”: The chequered history of Underground Coal Gasification and Coal Chemicals around the world” is a new report that sets out the dangers that Underground Coal Gasification and Coal Chemical poses in terms of climate change, local environmental impacts and public health. Against a backdrop of slow growth within the conventional coal industry, highly polluting, unconventional coal technologies threaten to further destabilise the earth’s climate. If exploited these technologies could blow the global carbon budget, and in doing so spell certain catastrophe for our planet. At a time when sustainable renewable energy is proving to be cleaner, safer and better for people, it makes no sense to exploit dirty technologies like Underground Coal Gasification and Coal Chemicals that would make it vastly harder to avert runaway global warming. 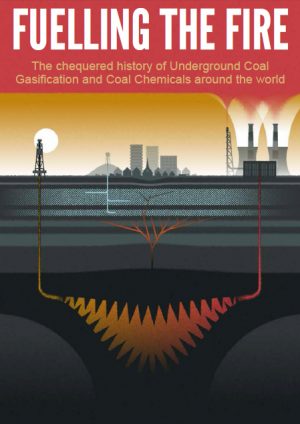