In January 2015 the European Commission published the first results of a public consultation with the highest number of responses in the history of the EU – more than 145,000 submissions by citizens. What had raised the interest and opposition of so many European citizens? A secretive legal system that had been virtually unknown to the general public a few years ago: the investor-state dispute settlement mechanism, or ISDS.

The debate has not passed unnoticed by the law firms and corporate lawyers who are the main beneficiaries of the booming investment arbitration system and stand to gain if ISDS is included in TTIP. In response to the criticism of the ISDS system, a number of international arbitration law firms recently founded a think tank designed to protect the current ISDS system: The European Federation for Investment Law and Arbitration (EFILA).

This briefing takes a closer look at EFILA, and the law firms and individuals linked to it, to show that EFILA represents an attempt by the arbitration industry to fend off public pressure and much-needed changes to the current system of international investment law. 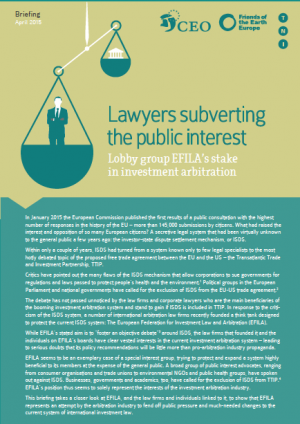