Traditionally, international human rights law focuses on the role and responsibilities of states. Human rights abuses arising from the cross-border activities of corporations is the largest gap in international law. In our globalised world, companies operate between different national jurisdictions and often escape accountability.

Transnational corporations (TNCs) and other companies are often implicated in human rights abuses across Asia. A destructive coal mine in Bangladesh threatens to destroy one of the world’s largest mangrove ecosystems. Hundreds of people risk being displaced from a mega-sugar plantation in Sri Lanka. Yet many of these crimes go on unpunished, due to corruption in local legal systems and the fact that many corporations are richer and more powerful than the states that seek to regulate them.

This booklet highlights examples of corporate crimes across Asia, and the importance of this new legally binding international instrument, which is needed to help fill a glaring gap in international law, that allows TNCs and other companies and their investors and financiers to act with impunity. It will also provide urgently needed justice for millions of affected peoples. States must commit themselves to this process, and act proactively to establish a Binding Treaty that protects the interests of the world’s peoples. 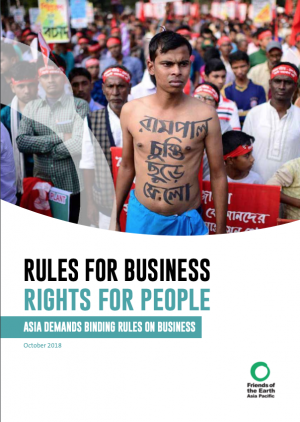