Skip to content
HomePublicationsRules for business, rights for people – Asia in focus

The biggest companies in the world are often implicated in human rights abuses. A man is killed defending his home from a destructive mining project in El Salvador. Hundreds are displaced from their traditional lands to make way for palm oil plantations in Indonesia. Yet many of these crimes go unpunished, due to corruption of local legal systems and the fact that many corporations are richer and more powerful than the states that seek to regulate them.

Since 2014 a historic UN process has been unfolding at the Human Rights Council (UNHRC) to enforce new binding rules on business and bring justice to thousands of victims.

At the 1st session of the Inter Governmental Working Group (IGWG) in 2015, UN member countries worked on the scope, content and form of this new Human Rights treaty. From 24 to 28 October 2016 the IGWG will hold its 2nd session in Geneva, supported and monitored by an alliance of civil society and social movements representing countries and communities affected by TNCs. 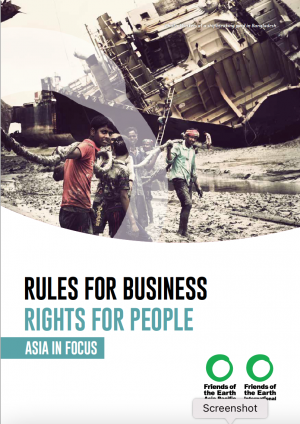