Skip to content
HomePublicationsRules for business, rights for peoples – Africa

The biggest companies in the world are often implicated in human rights violations. Yet many of their crimes go unpunished. Since the killing of Ken Saro-Wiwa and eight activists on November 10 1995 for daring to challenge Shell in Nigeria, over 5,000 other Ogonis have died in repressive military actions and violent oil-related conflicts. Transnational corporations (TNCs) like Shell, Chevron, Eni and Total have been operating in the Niger Delta with impunity for decades. The issue is systemic and with severe impacts on people and the planet.

Since 2014 a historic UN process has been unfolding at the Human Rights Council (UNHRC) to enforce new binding rules on business and bring justice to thousands of victims. At the 1st session of the Inter Governmental Working Group (IGWG) in 2015, UN member countries worked on the scope, content and form of this new Human Rights treaty. From 24 to 28 October 2016 the IGWG will hold its 2nd session in Geneva, supported and monitored by an alliance of civil society and social movements representing countries and communities affected by TNCs. 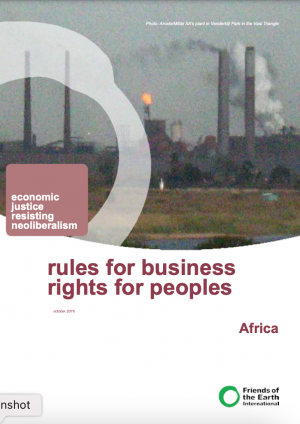