The Regional Comprehensive Economic Partnership (RCEP) is currently being negotiated between 16 countries in the Asian region. It includes China, members of the Association of Southeast Asian Nations (ASEAN) and other key trading nations such as Australia, South Korea, Japan and India. Over 50% of the world’s population lives in the negotiating countries, which account for over a quarter of global exports and almost 30% of the world’s GDP [1]. Like other trade agreements, such as the Trans Pacific Partnership (TPP), these negotiations include a focus on trade liberalisation, address varying regulatory disciplines.

If signed, RCEP would grant corporations the exclusive right to bypass domestic legal systems and sue governments at international tribunals whenever they feel government regulation can limit their profits. New research reveals that investors have launched 50 lawsuits at secret international arbitration tribunals against governments negotiating the RCEP agreement for at least $31 billion US dollars.

This report compiles available data on ISDS cases taken against countries party to the RCEP negotiations. The report highlights the ongoing corporate attack on Asian governments’ right to regulate, including actions following the introduction of measures to protect the environment. It also underlines the costs that this system has already had to democracy in the region. 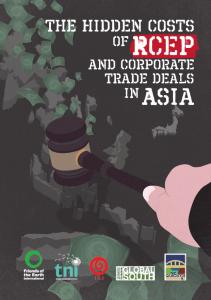