Skip to content
HomeNews’Stop the haze’ : Friends of the Earth Indonesia protest at Paris climate talks 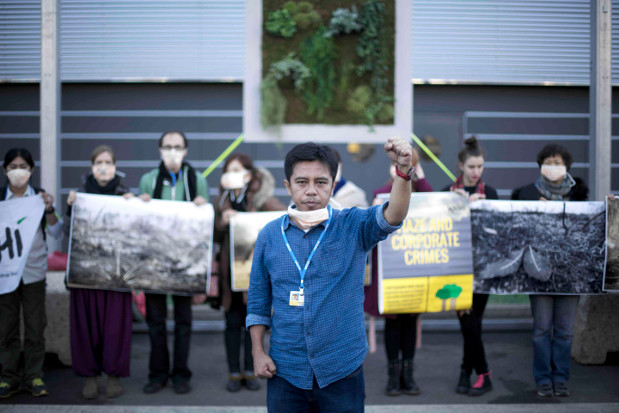 Activists from Friends of the Earth Indonesia/WALHI held an action at the international climate talks in Paris today, about the forest fires that have raged through the country for months, and the need for governments to regulate the corporations and international financiers.

In the past three months, haze from fires raging over forest and peat lands in Kalimantan and Sumatra has harmed 45 million people. The fires have caused 1.6 billion tons of greenhouse gas emissions in 2015.

Friends of the Earth Indonesia/WALHI is helping to evacuate vulnerable groups, such as babies and infants, breast-feeding mothers, pregnant women and the elderly, to safety. It is demanding the companies responsible be held accountable and that the financial sector stops funding companies that burn forests and peatlands.

Kurniawan Sabar, from Friends of the Earth Indonesia, said “People and the climate are being suffocated. We are losing our forests. Each year our communities are suffering more and more. And through it all the corporations are benefiting. This has to stop – the corporations must be held accountable.”

Sam Cossar-Gilbert, Friends of the Earth International economic justice coordinator said “These forest fires are a climate crime. A meaningful deal in Paris must hold companies accountable for stopping emissions wherever they occur.”