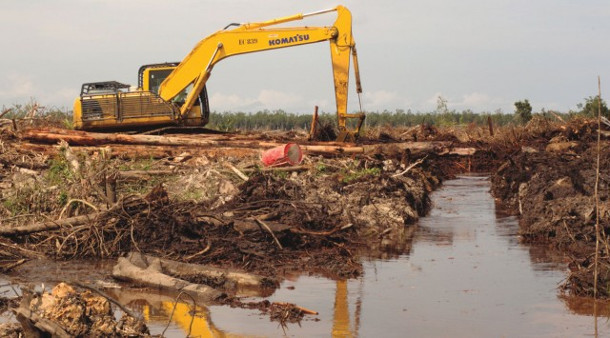 Deutsche Bank has told Friends of the Earth Europe and Rettet den Regenwald that it has sold its shares in the Indonesian palm oil supplier Bumitama, an important supplier to palm oil giant Wilmar, following months of campaigning by the two groups. Despite numerous promises to clean up its act, Bumitama continues to produce illegal palm oil.

Bumitama supplies palm oil to one of the largest global traders in palm oil, Wilmar International, and received financial support from well-known European banks including HSBC, Deutsche Bank and Rabobank. Deutsche Bank’s announcement was made during their AGM on Thursday May 22nd, after the German NGO Rettet den Regenwald presented 87,900 signatures from German citizens calling on Deutsche Bank to divest from Bumitama.

Rettet den Regenwald spokesperson Mathias Rittgerott, who presented the signatures to Anshu Jain and Juergen Fitschen – the CEOs of Deutsche Bank – commented: “It is high time that a financial institution like Deutsche Bank listens to the voices of both its customers and German citizens. We do not support palm oil production, and we do not want Deutsche Bank to give any support to destructive palm oil companies.”

Anton P. Widjaya, director of Walhi-Friends of the Earth West Kalimantan said: “Deutsche Bank’s divestment from Bumitama is a good start towards cleaning up the mess of Bumitama and this step must be followed by other banks and investors who wish to invest responsibly.”

Friends of the Earth Europe presented participants at the Deutsche Bank shareholder meeting in Frankfurt with numerous cases of land-grabbing by Wilmar in Africa and Indonesia, including cases by Bumitama. Mr. Fitschen responded that Deutsche Bank is in dialogue with Wilmar but is not ready to divest from palm oil companies in general because there is as of yet no alternative to palm oil.

Anne van Schaik, sustainability campaigner at Friends of the Earth Europe said: “Deutsche Bank has taken a positive first step. Now it must continue along this path by divesting from Wilmar, who despite promises to improve its behaviour, have not solved its problems in the countries where they operate. The palm oil sector has so many cases of land grabbing, deforestation and environmental degradation that there is no excuse for responsible financiers to invest in it.”