Skip to content
HomeNewsFisherfolk who plant trees: Turning the tide on mangrove deforestation 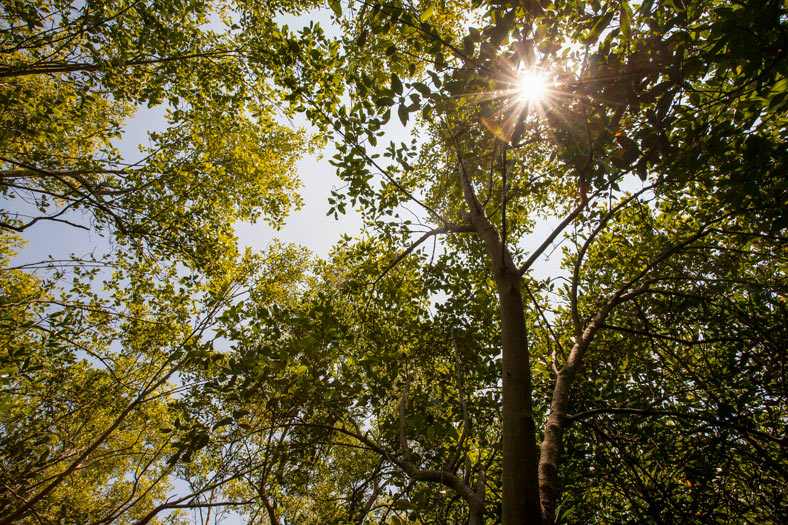 Planting trees seems a strange thing for a fisherman to do. And when a group of fishermen began planting mangroves on Malaysia’s west coast in the late 1990s, some people said they were crazy. Then the 2004 Indian Ocean tsunami happened and everything changed.

Amid the destruction and chaos visited on the region one thing became clear: areas where mangroves still grew had suffered less loss of life. “People began to listen and understand the importance of planting mangroves,” says Ilias Shafie, first a fisherman and now president of that pioneering group of mangrove foresters, Penang Inshore Fishermen Welfare Association (PIFWA).

Today, PIFWA can claim to have planted 300,000 mangrove trees and trained thousands of people in the art and science of mangrove silviculture. The work to roll back the demise of the fragile habitat on which many livelihoods depend goes from strength to strength.

A team from Friends of the Earth International went to find out why tree-planting and fishing are natural allies.

Mangrove forests don’t just shelter coastal communities from tropical storms. From Asia to Central America, they are key to entire ecosystems, economies and cultures. Stabilising the shoreline and reducing soil erosion, they are also home to myriad species of plants and animals, they provide timber and non-timber forest products, and they support fisheries.

Yet these unique salt-water edgelands have been in sharp decline in recent decades. In the Americas mangroves are disappearing faster than tropical rainforests. Half of the world’s mangrove forests (more than 30 million hectares) have been destroyed or cleared in the past half century.

“Agriculture and development are the biggest threats,” says Ilias, who as a fisherman in the 1980s saw shrimp farming and inshore trawling begin to sweep away mangroves and threaten his livelihood. When he found out about an organisation whose aim was to support people like him, he joined. By 2006 he was president of PIFWA.

Ilias and PIFWA have their work cut out. Mangrove forests are under attack on all sides. If not being cleared for shrimp farming, infrastructure development, industry or tourism, they may fall to over-harvesting for firewood, pulp, charcoal and even animal fodder. Illegal trawling within the five-mile inshore zone has been a problem for decades. Chemical and oil pollution kills trees and the animal populations that live among them. Then there are large-scale landscape changes – irrigation, changing salinity, dams that alter the course of rivers, and rising sea levels. The death of coastal coral reefs, which provide a layer of protection for mangroves, represents another threat.

Not all of these threats are within PIFWA’s sphere of influence. But Ilias and colleagues can plant, keep watch, educate and network. “People still cut down the mangroves to use for coal, pilings and firewood, and the tannins are used for pigmentation. So PIFWA plants and monitors the trees,” says Ilias. Monitoring is necessary to prevent trees being cut down and to ensure the forest’s survival.

Meeting first almost a quarter of a century ago, PIFWA was established with the help of the Consumers’ Association of Penang and Friends of the Earth Malaysia/Sahabat Alam Malaysia  to assist inshore fishermen – those who work up to five miles out to sea using traditional fishing methods. They catch fish, prawns and crabs, but also collect shellfish, some of which are found in the mangrove forests. Some inshore fisherfolk also have downstream activities such as making salted fish or shrimp paste.

Membership of PIFWA grew so quickly that they had to get organised, holding regular meetings and restricting numbers so as to be able to manage the group effectively. This included becoming an association in 1994, thereby securing official recognition.

Today, although membership is kept to 30, with 10 committee members and a women’s group, PIFWA supports and trains thousands of non-member fisherfolk, students and community members. It is a force to be reckoned with, recognised internationally for its role in safeguarding coastal biodiversity.

For SAM, the relationship with PIFWA forms part of a programme focused on protecting fishery resources and marine and coastal ecosystems from destructive activities such as coastal reclamation, aquaculture development and unsustainable fishing practices.

A key activity is planting and growing mangroves, and PIFWA runs some 30 planting sessions a year.

Originally PIFWA members would go into a forest reserve to collect seeds. These days they produce their own from mother plants. They also share seeds with other communities.

Of the 50 or so known species of mangrove, PIFWA’s project involves dozens – but they fall into three main types: those that bind soil and help prevent erosion; those that provide breeding grounds for fish; and those that provide food such as tea, jam, and fruit.

It takes around three years from planting for a mangrove tree to mature. The survival rate for trees planted in this project is 90%, whereas in other places it may be as low as 10-20%. Ilias attributes much of this success to the fact that PIFWA has a nursery where the saplings are protected and cared for before being transplanted. Once planted they are tended and protected from crabs and monkeys.

PIFWA’s popular education and outreach programme is another factor in its success. “Other mangrove planting groups run by the government do not include training and learning,” says Ilias. Neither do children learn about mangroves via the school curriculum. “The government is talking about bringing it into the curriculum, but they haven’t yet.” PIFWA has stepped in to fill the gap.

Since 2012, when the group completed construction of a conservation education centre – with grants from the Global Environment Facility Small Grants Programme Malaysia (GEF SGP) – 10,000 visitors have come to learn about planting and looking after mangroves and the range of resources this unique habitat provides. PIFWA stages exhibitions, hosts interns and encourages trainees to get their hands dirty.

The practical character of the training – learning by planting – is more effective than studying text-books alone, says Ilias. “And by getting involved people have a greater sense of ownership.”

Not that PIFWA ignores other forms of information and learning. Books, streamers, pamphlets and videos on coastal resources and traditional fishing have been developed with support from the Danish International Development Agency (DANIDA) and the Global Environment Facility Small Grants Programme Malaysia (GEF SGP).

Each year PIFWA runs two workshops for fishermen and three women’s workshops. And their reach is growing in Malaysia and beyond – Cambodia, Laos, Vietnam, Sri Lanka. Travelling outside Malaysia also gives PIFWA members opportunities to learn how mangrove forestry is done elsewhere.

A few years after its establishment, PIFWA intended to include a women’s group, but faced challenges as  some politicians were not happy and stifled their movement. Finally in 2013 the women’s group PIFWANITA was formed. They meet separately and take plans to PIFWA to raise funds. But this structural separation does not mean the women are not fully involved in the work of the project.

PIFWANITA members do conservation and educational work, and promote mangroves as an environmental resource and income generator for communities. They make sustainable produce such as jam, tea and health remedies, from natural products found in the forest.

An important strand of PIFWA’s work has been keeping track of trawlers encroaching illegally on the five-mile inshore zone, depleting stocks. Fishermen set up a nightly patrol, taking photos, filming and reporting boats to the Department of Fisheries and this appears to have helped reduce illegal activity.

An interesting side-effect seems to have been an improvement in PIFWA’s rapport with the authorities. In its early days the organisation struggled to gain official approval, and was at one point threatened with de-registration. These days, PIFWA is seen as something of model for the role that community organisations can play in protecting the environment and livelihoods. It’s a role the group champions not only via its education programme but also through its energetic networking – for example the Jaringan Bertindak Nelayan Pantai Semenanjung (JARING), a network of coastal communities which SAM helped to found.

PIFWA’s rehabilitation of degraded mangroves has transformed the wetland ecosystem of the area, reviving biodiversity and enabling the inshore fisher community to sustain their way of life here. There are reports that numbers of shellfish and crabs in the mangroves are up and even that fish catches in neighbouring waterways have improved too.

It is estimated that 812,000 hectares of lost or degraded mangrove across 106 countries and territories have the potential for restoration. If we are to get anywhere near meeting such a goal, the expertise and work of the women and men of PIFWA will have a vital role to play.