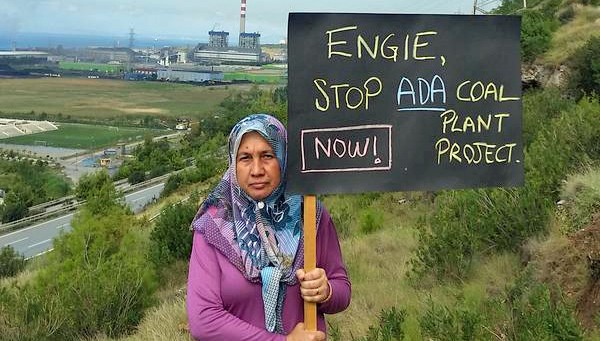 Paris, France, October 15, 2015 – The day after French energy giant Engie announced it will stop investing in coal [1], Friends of the Earth International called on all energy multinationals to move into this direction immediately and stop dirty energy investments.

Engie – formerly GDF Suez – announced on October 14 that it will not invest in any new coal projects, adding that existing contracts may still be honoured.

Engie’s dirty energy investments were proving to be a major embarrassment to the company and to the French government, as the company is a sponsor of the upcoming United Nations climate talks, which Paris will host from 30 November.

The announcement represents a victory for communities affected by Engie’s operations, supported by civil society organizations, including Friends of the Earth France, who have worked tirelessly against Engie’s dirty energy investments.

“Engie’s announcement is people power at work. We have supported grass-roots communities resisting dirty energy and drawn powerful international solidarity to this campaign. We will keep this momentum building until we see an end to dirty fossil fuel and nuclear energy,” said Malika Peyraut, energy campaigner with Friends of the Earth France.

“We welcome Engie’s announcement but the fight against dirty energy is far from over. We need a total coal phase-out. Dirty energy power plants must be closed and a just transition for coal workers put into place,” said Dipti Bhatnagar, Friends of the Earth International’s climate justice coordinator.

A video by Young Friends of the Earth France/ Jeunes Amis de la Terre France demanding that Engie change its tune went viral on social media last week, adding to the chorus of voices insisting that Engie, a sponsor of the upcoming Paris climate talks, stop its climate wrecking investments.

Friends of the Earth International maintains that the way we produce, distribute and consume energy is unsustainable, unjust and harming communities, workers, the environment and the climate. [3]