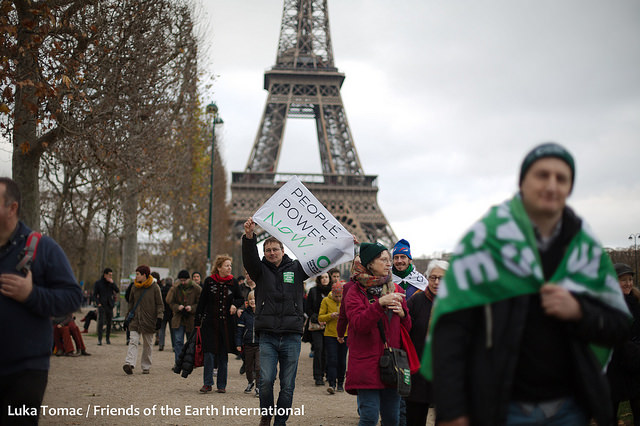 Despite the very favourable reception given by some, Friends of the Earth International believes that the Paris Agreement fails to deliver climate justice. It is a weak agreement where rich countries do not do their fair shares of emissions cuts, or provide their fair share of finance for energy transformation and adaptation for developing countries. There are almost no hard numbers or goals within the text to ensure ambitious action on climate change. The part of the text that may have offered redress for vulnerable communities who have suffered irreparable impacts of climate change has been weakened so as to render it ineffective.

Friends of the Earth International alongside civil society organisations, trade unions, and grassroots movements agreed a set of demands in June 2015 (called ‘the People’s Test on Climate‘) as a yardstick to assess the Paris climate deal.

Friends of the Earth International judge that the Paris Agreement fails the People’s Test on Climate.

Conclusion
Overall the Paris Agreement fails the People’s Test on all counts. It not only has weak overall goals, but it lacks the specific concrete obligations to deliver on emissions reductions, finance for transformation and justice for affected peoples. It does not rule out false solutions. Friends of the Earth International believes this deal is a bad one for climate justice.

Read news from FOEI about the COP in Paris.