Skip to content
HomeNewsFriends of the Earth Netherlands: Nigerians and Milieudefensie appeal in Shell case 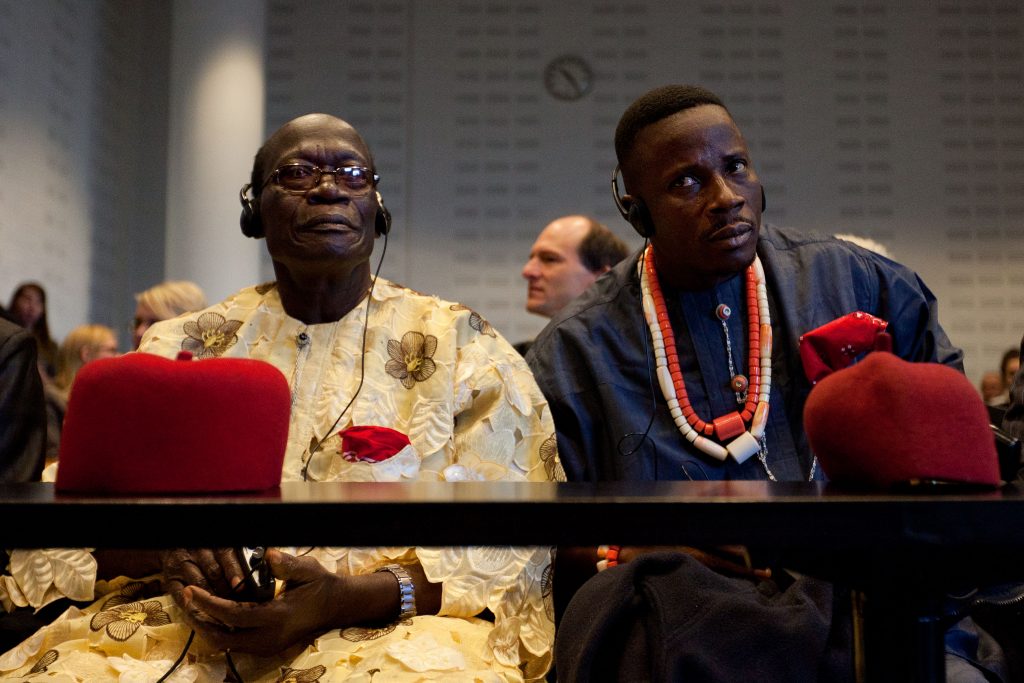 AMSTERDAM/PORT HARCOURT, 1 May 2013 – Today, the Nigerian farmers from two villages who lost their case against Shell, together with Friends of the Earth Netherlands (Milieudefensie), have submitted an appeal to the 30 January decision by the court in The Hague. Milieudefensie is also filing an appeal in a third case. All the cases are centred around oil pollution due to spills from Shell pipelines and oil wells.

Chief Fidelis Oguru and Eric Dooh in court are plaintiffs in the case against Shell.In one case, the court ruled in favour of Milieudefensie and one of the Nigerian plaintiffs, Elder Friday Akpan. Shell was ordered to pay compensation to this farmer from the village of Ikot Ada Udo, because the company did not adequately protect its oil well from vandalism, and oil from the well streamed over Akpan’s land. In this case, however, the court ruled that Shell Headquarters in The Hague could not be held liable for the failures of its subsidiary, which is responsible for the daily management of Shell in Nigeria. Milieudefensie hopes that the court in The Hague will reverse its decision on this point – for Milieudefensie it is clear that the headquarters shares responsibility for the massive environmental damage in Nigeria.

The lawyer for the farmers and Milieudefensie disputes in its entirety the decision taken by the court in the cases addressing damage from oil spills from Shell pipelines in the other two villages, Goi and Oruma. In those two cases, the court did not find Shell liable for the damages suffered by the farmers due to the oil spills because the cause was considered to be sabotage and the court ruled that Shell could not have reasonably prevented it.

In Nigeria the cases are being watched with great interest. Oil and Mining campaigner Evert Hassink of Milieudefensie has been to the country numerous times: ‘In the village of Goi, Chief Eric Dooh and his fellow villagers are still living amidst the sticky black remnants of oil spills from the Shell Trans-Niger pipeline. In Oruma, Chief Fidelis Oguru, Alali Efanga and the rest of the village are trying to rebuild normal lives. But the fish that supported them in the past have yet to return to the polluted creeks, and they are still hoping to receive compensation for all the years that agriculture was impossible because their fields were polluted by Shell oil.’

The case, which today enters its next phase in the court in The Hague, is of considerable international significance, especially after the recent decision by the US Supreme Court in a comparable case. It ruled that under US law it is not possible in principle to take multinationals to court for human rights violations outside the United States. This further increases the need to hold multinationals liable in their home country.