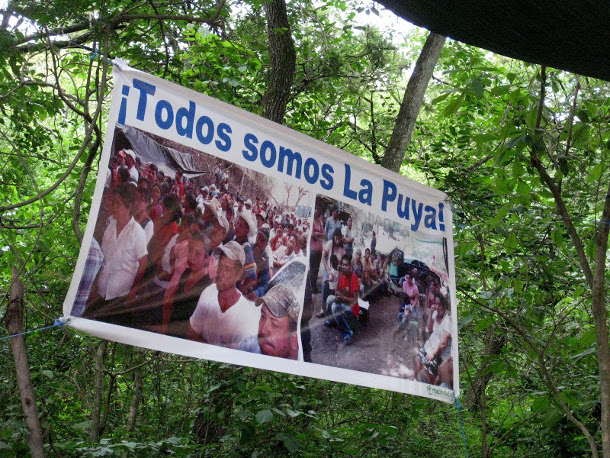 March 2nd marked two years since the beginning of the resistance on the border between San Jose del Golfo and San Pedro Ayampuc municipalities, outside Guatemala city, at a place known locally as “La Puya” . Members of various communities and organizations are blocking access to “El Tambor”-Progreso VII, a gold mining project operated by EXMINGUA company with a 25-year concession.

This is one of the fifteen mining projects that is being built in the metropolitan area of Guatemala city, which would affect the access to water for approximately 40 thousand families in both municipalities. It is an emblematic case even in Guatemala, where dozens of communities are involved in resistance actions against energy-mining projects (hydrocarbon, metal or hydroelectric, among others) because of the constant and provocative presence of groups financed by the company itself (which is a subsidiary of US company Kappes Kassiday & Associates, KCA).

However, resistance at “La Puya” is both peaceful and legal, which has been essential, according to spokesperson Antonio “Tono” Reyes, in avoiding the provocation of any violent response by state forces, whc take sides with the mining company.

Moreover, Reyes said in an interview with Real World Radio that international solidarity has been key for this long-standing resistance, which has not been exempt from dramatic moments, such as the attempts to murder one of its leaders, the police attacks and blackmails by the company, which was even present at a meeting with the Guatemalan Presidency.

The “La Puya” struggle focuses on water, which is scarce in the region, and which will be massively consumed by the gold and silver mining exploitation project. Arsenic levels in underground water in the region are already extremely high, said Reyes, and the building of these projects would make it impossible to use if for human consumption.

In December, 2012, anti-riot forces repressed and kidnapped people guarding the blockade, who are obstructing machines introduced by the company despite community rejection of the company’s actions.

The resistance had to endure a series of violent actions financed by the company itself, in which supposed mine workers pretended to destroy the blockade which is preventing the machines from accessing the work site.

This is what Reyes said in a phone interview from San Jose del Golfo. He gave us a detailed account of the two years of resistance, sustained with great effort and organization capacity by the communities.

Communities have developed communication mechanisms in order to call for hundreds of people in the middle of the night to repel the attacks by the company.

On February 27, the construction company PIF decided to withdraw 57 units of machinery of El Tambor mining project. Tractors, bulldozers, pick-up trucks and vans were withdrawn after a dialogue process with community members of “La Puya” resistance movement, who celebrated the decision as a victory.

The mining company insisted on continuing with the project, however, the concession company decision is considered by the organizations as a sign of the weakness of the project, brought by the confirmation of social rejection. The communities warned that they won’t leave their campsite, which is supported by daily shifts to prevent access to the field occupied by the mining company until it is formally suspended.

In the interview with Real World Radio, Reyes said that the community rights of both municipalities have been violated, especially the right to prior, free and informed consent, with the complicity of the Guatemalan state.

“Thanks to the patient intervention of women, we avoided falling into the trap of the company and reach a blood-spilling confrontation”, said Reyes, pointing out that peaceful resistance has also been part of what was learned in these past two years.

During the resistance, Reyes said the Guatemalan State took sides in favor of the company. “Both the company and the State tried to convince us about the advantages of the project, but we are strong and they are not going to achieve it”.

In this sense, he highlighted that the resistance will continue as long as the project continues.

“What has made it possible to resist peacefully in a non violent way during all these years –and the 23 years that remain before the license expires- is that as communities we have certain internal rules: we don´t have any political-partisan, religious, spiritual, ethnic or sectoral banner. This means, this is a struggle for life and for the natural resources that make it possible”, said “Tono”.

“In Guatemala, we have long experience when it comes to revolutionary processes and opposition by the population who have been discriminated against, exploited, repressed, massacred and the answer has always been violence against violence”, he stated.

“Thanks to the support of national and international organizations, we’ve managed to grasp the concept of non violent struggle, of peaceful resistance with a legal, constitutional basis, in addition to international conventions ratified by Guatemala”.