Skip to content
HomeNewsMobilize, resist, transform: Friends of the Earth groups among millions mobilizing for climate justice across the world

The world’s streets came alive with the footsteps and voices of climate protestors, from 20-27 September 2019, as millions came out to demand that governments and companies take real action on climate change. A record 7.6 million people – including youth, social movements, trade unions, workers and activists – took part in global climate strikes and actions across the planet, making this the biggest climate mobilization in history.

Friends of the Earth groups around the world were part of this movement, supporting school strikers and calling for climate justice for those on the front lines already facing the impacts of climate change, dirty energy and false solutions.

Groups across the Asia-Pacific region called for an end to fossil fuels and demanded a just transition to renewable energy. From Malaysia to Sri Lanka, Australia, the Philippines, Bangladesh, Japan and Indonesia, thousands walked out in protest. In South Korea and Timor-Leste, people were even out on their bicycles.

Amongst the huge numbers mobilizing in Melbourne, Australia, our FoEI flag  proclaiming the strong message of “dismantle patriarchy not the planet” was featured.

"Climate Justice for all"

Europe saw some of the biggest climate mobilizations, with 1.4 million people reported in Germany alone. This year was dominated by the voices of young people, inspired by the global #FridaysForFuture movement and young climate activists including Greta Thunberg. Youth and families across the continent made demands to protect their future, including in Croatia, Spain and Austria. 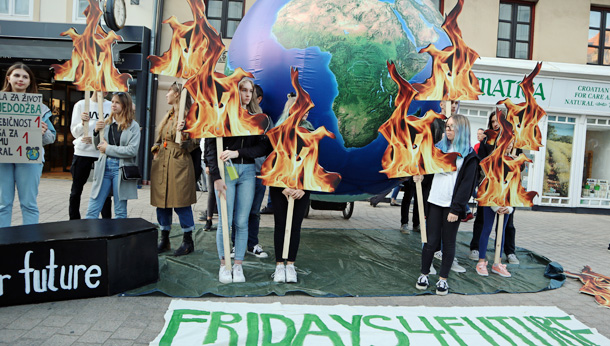 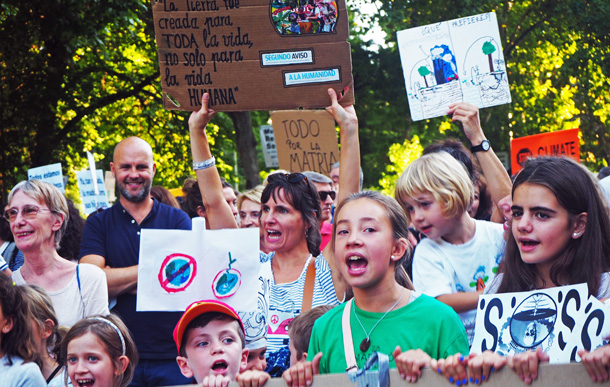 In Macedonia, young Friends of the Earth organized a workshop on building power and global action.

Our colleagues from Young Friends of the Earth Macedonia organized this workshop about building power and global action #climatestrike #schoolstrike #climatjustice pic.twitter.com/49tRksvif0

Get the full round up from Friends of the Earth Europe.

Youth in Africa also mobilized and led actions to raise awareness on climate issues. Friends of the Earth Togo organized a football match action with local children, while a young activist from Mozambique took part in the strikes and spoke powerfully on climate justice.

Groups in Nigeria, South Africa, Ghana, Tanzania and Togo took messages of “climate justice for all” out on to their local streets.

Accra march for Climate. Thank you all for showing up. Now let’s carry the message home. The demand for climate action shall continue until our leader start acting. #climatestrike pic.twitter.com/egmuws3bbM

Two representatives from Friends of the Earth Africa also joined the mobilization on the streets of New York city, ahead of the UN Secretary General Climate Action Summit held there on 23 September. Philip Jakpor from Environmental Rights Action, Nigeria, and Sostine Namanya from NAPE, Uganda, joined the crowds of over 300,000 people.

They also took part in a Southern Voices side event, an action against the Oil and Gas industry with allies and secured some fantastic media coverage.

There were huge marches across many cities in North and Latin America. Friends of the Earth US helped organize a shutdown of Washington DC to demand action on the climate crisis, and groups in Paraguay, Colombia and El Salvador were out on the streets, even in the rain.

Friends of the Earth International brought forward a single coherent demand for system change, and showed solidarity with indigenous peoples and local communities most severely and immediately affected by the climate crisis. In an interview on Real World Radio, climate justice and energy campaigner Sara Shaw commented:

“Communities in the South are being hit by the impacts of climate change and dirty energy now. It’s not a question of the future, it’s a question of now… We are participating in these mobilizations to stand with people being impacted now as well.”

These demands for climate justice and real system change come at a critical time, as peoples in the global South already feel the devastating effects of climate crisis whilst northern governments fail to cut emissions or provide the finance needed for energy transition.

The incredible turnout in this week of mobilization is an inspiring display of people power in action. But this must lead to action by Northern governments to reduce emissions, stop funding fossil fuels, and to pay their fair share for energy transformation and climate damages in the global South.