Skip to content
HomeNewsParis Climate Summit: Not enough progress by half 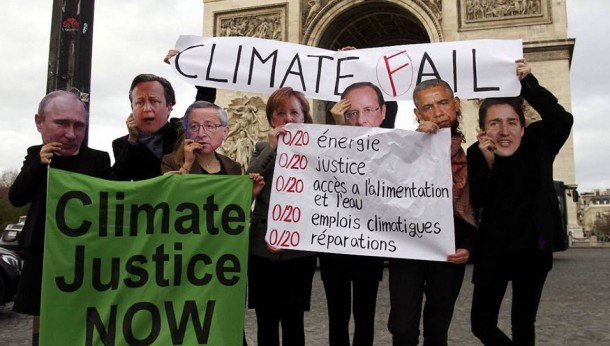 PARIS, FRANCE, December 5 – The Chairs of the ADP (Durban Platform for Action) have just handed over negotiating documents to the French Presidency of the COP21 climate summit in Paris, formally closing the ADP negotiations. [1]

The United Nations climate talks have made little concrete progress on the most critical aspects of a just deal to respond to the climate crisis, said Friends of the Earth International at the mid-point of the talks.

At the end of a frustrating first week, only reassurances by the French hosts that negotiations on all key issues will continue, and that developed countries would begin to engage with the negotiations in good faith, prevented the process derailing altogether. The high level segment of the talks, attended by ministers, will begin work on Monday on the final ‘Paris text’.

Lucy Cadena, Climate Justice and Energy programme coordinator at Friends of the Earth International, said:
“It is still unclear whether the warm words and half promises we’ve heard this week will yet lead to firm commitments. Will we really see a commitment to a more ambitious temperature threshold? There have been piecemeal pledges for finance for vulnerable countries to adapt, but nothing consistent or in line with rich nations’ fairshare of effort. Nor is there clarity on support to enable the poorest to recover from unavoidable impacts of climate change. Those who grew rich through a dirty climate-changing system and addiction to carbon pollution are leaving poorer countries to foot the bill as if they carry equal responsibility. The lack of progress in the halls is in complete contrast with the vibrancy and creativity of people on the streets and in alternative gatherings throughout Paris.” [2]

Asad Rehman, spokesperson for Friends of the Earth International, said:
“Rich, developed countries, led by the United States are negotiating in bad faith here in Paris – they are refusing to even discuss proposals brought by developing countries. The poorest, most vulnerable nations are being bullied behind closed doors and their issues are being railroaded out of this process. It is simply unacceptable that the USA won’t live up to its legal and moral responsibilities. At the same time civil society observers, the eyes and ears of global citizens, are being shut out of negotiating rooms. Not only are we seeing an ambition deficit, but we are seeing a fundamental lack of justice.”

[2] The ‘Fair Shares: A Civil Society Equity Review of INDCs’ report, from climate justice organisations, social movements, faith groups, trade unions, environmental and development organisations, shows that many developing countries are pledging to do more than their ‘fair share’ to cut emissions while rich countries are dangerously failing to pull their weight.

Negotiations update from Friends of the Earth International

The negotiations are reaching the mid-point with a very long text and almost all options still on the table.