Chair of Friends of the Earth International Jagoda Munić reflects on the international solidarity mission to Palestine.

Our mission finishes in a village close to Jerusalem that is surrounded by the wall. Water is an issue here as well, as water access comes through nearby Israeli settlements. Sometimes when, for instance, there is a festival in the settlement, they simply close the pipe and cut off the water. Most Palestinian villages, unlike Israeli settlements, have water tanks on many roofs. Living with frequent and unpredictable interruptions to the water supply means Palestinians need to be prepared for outages in ways their neighbors do not.

Checkpoints, the wall, barbwire and injustice; it’s not surprising that Palestinians call this apartheid. Large red signs announce zone A, under Palestinian Authority: This road leads to area “A”, under the Palestinian Authority, The entrance for Israeli citizens is forbidden, dangerous to your lives and is against the Israeli law.

House in a cage

Perhaps the most ridiculous example of this perverse system is the Palestinian ‘house in a cage’, next to Jerusalem. As one Israeli settlement spread and grew, they wanted to take over the land and house of a Palestinian living nearby. But because the owner had a construction license issued by Israel in the 1970s, the court prevented the army from knocking down the house. Instead they built a cage around it, with only one access bridge under permanent surveillance and with doors that the Israeli army can close automatically and remotely, effectively locking down the house. If I hadn’t witnessed this myself, it would be hard to believe that something like this existed at all. It is so surreal. 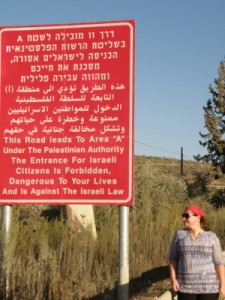 Jagoda Munić at the FoEI solidarity mission to Palestine 2013

I feel numb. Perhaps my heart and brain still cannot believe the injustice we have seen.

Top: House in a cage images by Dave Hirsch