Read Friends of the Earth International’s Annual Report for 2014

In 2014, we endeavoured to support and show our solidarity with threatened communities and human and environmental rights defenders everywhere. This included mobilising significant resources for FoE Liberia/SDI’s work assisting communities ravaged by the Ebola virus. We also established a solidarity fund to support threatened activists, with member groups pledging and contributing vital funds and additional resources. Our programmes were, as ever, intensely busy throughout the year. FoEI’s Climate Justice and Energy programme was present at key UNFCCC negotiations, including in Lima, and published testimonies from people, especially in Latin America, who are already being seriously impacted by climate change. We also participated in the People’s Summit in Lima, where we continued to build cooperation and alliances with movements and organisations around the world, bringing the FoEI narrative into the mix. FoEI is recognised as one of the key organisations in the climate justice movement. In June we celebrated a groundbreaking victory with our partners in the Treaty Alliance and many Southern governments, when our work for a binding treaty on transnational corporations and human rights resulted in a resolution to start formal negotiations being passed in the UN Human Rights Council. Moving from global to local, across the world our member groups continued to help local communities resist dirty energy projects, including coal, nuclear power and mega- dams, land grabbing, the imposition of genetically modified organisms, forest destruction and unwanted land use changes. But we are not only resisting—we are also seeking out, supporting and suggesting truly transformative solutions, such as community-managed forests, agro-ecology and community-owned renewable energy production. We are mobilising to protect nature and the climate! 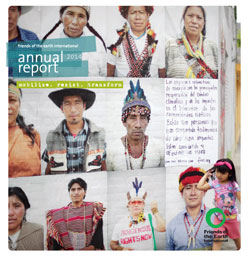 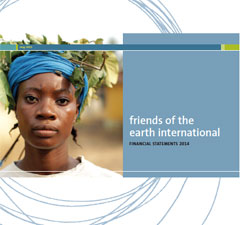