PRESS RELEASE 2 November 2022. SHARM EL-SHEIKH, EGYPT — Some of the most prominent global “net zero” initiatives have deep and troubling ties to the world’s largest polluters, according to a new analysis by Corporate Accountability, Friends of the Earth International (FOEI), and the Global Forest Coalition (GFC). Despite claiming to have “independent governance,” “provide objective and unbiased guidance,” or “to strengthen contributions to the Paris Agreement,” these initiatives’ industry ties cast increasing doubt on their credibility and veracity.

Prior analysis (more here and here) has delved into how the world’s largest polluters are using the “net zero” political agenda to stave off mandatory, enforceable emission reductions required to meaningfully address climate change. Now, as these initiatives gear up for their next PR offensive around COP27, this analysis offers yet another pointed reason for skepticism.

“This should be common sense. If you want a global ‘net zero’ initiative to be anything other than industry greenwash, you don’t appoint a who’s who from polluting industries and their financiers to help lead and shape them,” said Rachel Rose Jackson, director of climate research and policy for Corporate Accountability.

The analysis focused on three of the most prominent “net zero” initiatives that have upcoming reveals of standards or publications, including the Integrity Council for the Voluntary Carbon Market (Integrity Council), the High-Level Expert Group on the Net-Zero Emissions Commitments of Non-State Entities (HLEG), and the Race to Zero.

The Chair of Integrity Council’s governing board is senior counsel at a law firm that advises major polluters like ExxonMobil and Petrobas. In her time prior with the U.S. Securities and Exchange Commission she was accused of being “too closely associated with the weak federal oversight that contributed to the banking collapse.”

Helena Viñes Fiestas, an expert group member for HLEG was the head of sustainability research at BNP Paribas, which was the largest financier of fossil fuels in the EU from 2016-2020.

Race to Zero’s member banks invested more than US$500 billion toward fossil fuels in 2021 alone and successfully pressured the initiative to weaken its criteria for phasing out coal projects.

These are just a few of the examples.

“This analysis only scratches the surface of how deeply conflicted these ‘net zero’ initiatives are. It paints a picture of how this isn’t just about polluters trying to build ‘green credibility’, but of how they position themselves to shape and obstruct policy progress,” said Sara Shaw, climate justice and energy international programme coordinator at FOEI.

Five UNFCCC constituencies representing thousands of organisations around the world are advocating for an accountability framework for the UNFCCC as one important means of preventing such highly-conflicted initiatives from sucking the oxygen out of the November talks and beyond. An even larger group of more than 425 civil society organisations has also issued a call to stem the access of large polluters, through these initiatives and otherwise, to annual talks.

“For three decades the world’s largest polluters have treated the UNFCCC like a trade show. Corporate sponsors for policy talks. Hundreds of industry lobbyists working the halls. Endless hoopla for non-binding, ineffectual corporate initiatives. Enough is enough, the corporate capture of this space must end and big polluters cannot have a say in the UNFCCC anymore” said Coraina de la Plaza from the GFC. 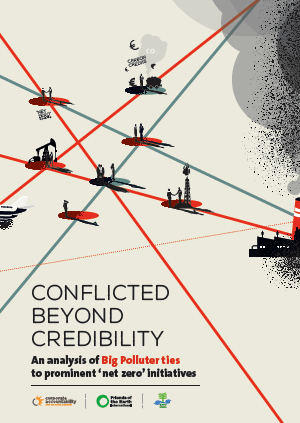 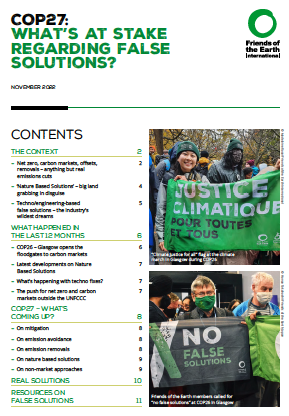 The Big Con: How Big Polluters are advancing a “net zero” climate agenda to delay, deceive, and deny. 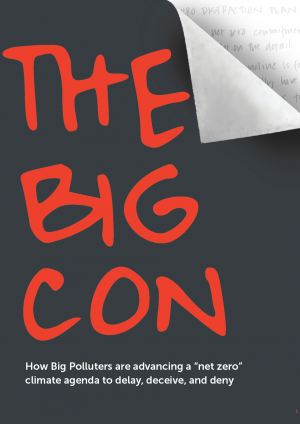