For some years now, forests and fields have been full of lawyers and businessmen offering deals with communities to include their territories in forest conservation projects or REDD (Reducing Emissions from Deforestation and Forest Degradation). These proposals are being promoted as new and original, when in fact, they are not. There are many precedents of projects that propose to “pay to conserve”, based on the opinion of economists who argue that the only way to value the forest is by setting a price for it. Consequently, they directly ignore a series of non-monetary

values that exist for millions of people who live in the forests; these values are rooted in cultural, spiritual and traditional uses, and they inspire communities to love, respect and protect their territories. In the majority of cases, these projects represent a huge risk for local communities, to the point of even being forced to leave their own territory. This can lead to an erosion of their culture, traditional ways of life and their practices to produce and secure basic needs.

This is a precautionary guide, based on an analysis of documents and contracts related to REDD (proposed or already signed), and clearly illustrates what is happening to those communities that have already signed-up to one of these contracts and the underlying risks that exist for others who may be tempted by similar projects. 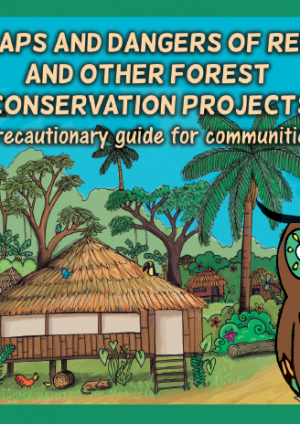