This research is led by women researchers and community leaders who are working together in an innovative way to make the invisible visible.

The proposals developed, felt and thought by women in their own spaces of resistance contribute to enrich the diversity of ways to defend the territory. Women remind us that the struggle for the defense of territory is closely linked to sovereignty itself. In a context of rapid masculinization of all spaces, women suffer directly –and to a greater extent— the impacts of extractive activities such as monoculture plantations.

Historically, women look for and recreate different ways to struggle and defend the territory, playing more active roles, joining forces to confront a common enemy that promotes looting. On the other hand, women in resistance teach us to understand the territory as an integrated holistic space, where the impacts of extractive activities disrupt acutely the cycle of reproduction of life, the difficult regeneration of which falls on women’s shoulders. The defense of territory goes beyond this. It means questioning a Western, capitalist, colonialist and patriarchal development model that in its pursuit of organizing life around a supposedly limitless economic growth, has declared war on life itself.

Women therefore stand up as protagonists in resistance, overcoming the obstacles of a patriarchal society. These experiences signal the fact that women organized in the defense of land build a space of freedom from which they reclaim their right to defend life, to speak with their own voices, to mobilize, resist and transform. 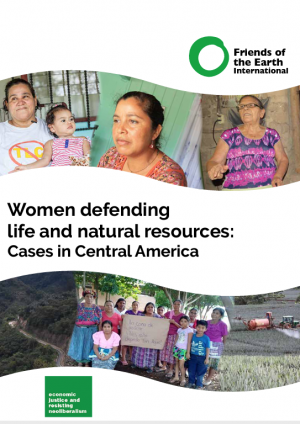