Skip to content
HomeNewsSaving lives: Friends of the Earth Liberia’s campaign against Ebola 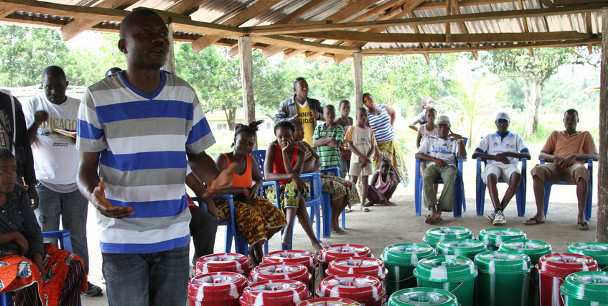 Late last year, we asked you to support Friends of the Earth Liberia in its bid to tackle the spread of Ebola. Liberia is now well on the way to being classified as Ebola free.

This was an act of solidarity with these communities during a critical period.

It has been one year since the announcement of an Ebola epidemic in Liberia, Sierra Leone and Guinea. Since then, Ebola has killed over 10,300 people. Liberia has lost 4,296 lives. To date, nearly 25,000 cases of Ebola have been recorded.

Groups like Friends of the Earth Liberia/ Sustainable Development Institute (SDI), have carried out vital life-saving work in rural communities.

Between August 2014 and March 2015, under its Community Awareness and Support Team (CAST) Initiative, Friends of the Earth Liberia and its partners:

Most of the rural communities were isolated, vulnerable and underprivileged with limited access to health facilities, and with low levels of awareness about the Ebola virus. The CAST Initiative was critical in raising awareness about safety and other preventive measures.

Liberia remains at risk of further cases. In neighbouring Sierra Leone and Guinea many new cases have been reported.

While we hope the crisis is over, it will have a lasting impact on many elements of life in Liberia.

Thousands of families lost relatives. They and survivors may be rejected by their communities. Many children have lost one or both parents and face a very uncertain future.

The ability of the already badly under-resourced health care system to cope with normal medical demands has been further undermined. Economic activities have also been badly affected.

In this context, the work of groups like Friends of the Earth Liberia, who works closely with communities on a range of social and environmental issues is really important.

10 Questions for Friends of the Earth Liberia