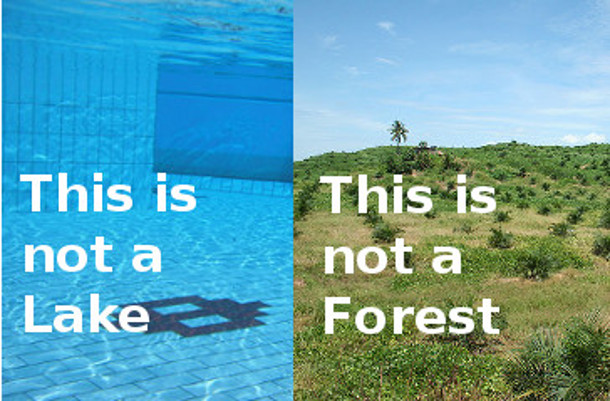 The FAO’s (The UN’s Food and Agriculture Organization) current definition actually promotes deforestation. Any area covered by trees could be counted as a forest under the FAO’s current definition. But forests are complex ecosystems; the structural, functional and biological diversity of non-tree elements that make up a forest are not taken into consideration. The cultural importance of the interaction between forests and communities is overlooked. Alarmingly, the inclusion of monoculture tree plantations in the definition misleadingly gives the impression that global deforestation is not the problem it once was. You really may as well call a swimming pool a lake.

The World Rainforest Movement, Friends of the Earth International, La Via Campesina, and Focus on the Global South wrote a joint letter on March 21 – International Day of Forests – asking the FAO to change the way it defines forests.

Write a letter or email to your local, national or regional FAO office asking them to urgently begin the process of devising a new definition for forests. Use some of the talking points below (or just copy paste if you’re in a hurry).

To whom it may concern,

The current definition of forest used by the FAO is inadequate. It does not adequately protect forests or the people who depend on them. At least 300 million women and men worldwide depend directly on forests for their livelihoods. These people must be consulted and their priorities included in devising a new definition.

The current definition preferences the perspectives of the timber, pulp/paper and rubber companies who benefit from planting large monoculture plantations. A new definition must reflect how forest dependent peoples see and use forests.

States and multilateral institutions such as the FAO and the World Bank still see forests as land where the commercial extraction of valuable timber by private companies is the best way for countries to get on the so called “development” track and take people out of “poverty”, yet the current definition leaves forest communities vulnerable to land grabs and undermines their food sovereignty.

The present reductionist definition also justifies the expansion of large-scale monoculture tree plantations as so called “planted forests”. Such large-scale monocultures are even considered “reforestation” and are said to compensate for forest loss. In practice, industrial tree plantations and other industrial monocultures like oil palm and soy have contributed immensely to the destruction of forests and other biomes like grasslands and savannas throughout the world. While providing a handful of transnational companies with enormous profits, they have left forest-dependent communities impoverished and often even driven them off their territories.

The FAO’s State of the world´s forests report continues to support the myth that deforestation is less of a problem than it was in the past. The supposedly positive news is the result of the current definition, which confuses forests and plantations, permitting tens of millions of industrial fast-growing monoculture plantations (such as eucalyptus, acacia and rubber) to be counted as “planted forests” in countries’ forest statistics.

Under the FAO’s present forest definition, even a genetically modified fast-growing eucalyptus plantation of 100,000 hectares is called a “forest”, in spite of all the negative impact it has as a large-scale monoculture crop, not to speak of the risk of contaminating the genetic composition of surrounding trees and forests.

For all of these reasons and many more, I implore you to begin the process of creating a new, more representative, less damaging definition for forests as soon as possible.

Images:1. View of palm oil plantation in Cigudeg, Bogor by Achmad Rabin Taim from Jakarta, Indonesia2. An underwater picture of a swimming pool by Tukka