The Asian Development Bank’s (ADB) annual meeting in Yokohama Japan this week marks its 50th anniversary. Yet there is little to celebrate. ADB operations around the world have left a trail of destruction; people displaced and negative impacts on farming lands, rivers, forests and the climate.

The bank claims to finance development with the aim of alleviating poverty in the Asia Pacific region. Despite this noble vision, the ADB fails to provide a better future for Asia’s poorest. Its neoliberal policies are grossly inadequate at addressing perhaps the greatest threat to Asia’s poor: climate change.

The ADB actually recognizes climate change as a fundamental threat to poverty alleviation. Climate change will hit the poorest the hardest as, to use ADB’s own words “ they encounter more intense tropical storms, more severe and more frequent droughts and floods, accelerated melting of glaciers and rises in the sea level, higher frequency of forest fires, shortages of freshwater, threatened crop production and aquaculture, higher incidence of heat-related and infectious diseases.”

Yet despite this, the bank has repeatedly prioritised the financing of coal projects over renewable energy alternatives. Coal is the biggest single contributor to human induced global warming. The ADB even recognises the role of coal fired power in exacerbating climate change. But in the last ten years alone ADB has invested over $3billion in coal projects. They are the third largest multilateral public financier of coal infrastructure.

Perhaps their most controversial project to date is the $450 million investment in the 4,000-megawatt Tata Mundra Ultra Mega Coal plant in the Indian state of Gujarat. The bank’s own compliance review panel exposed a lack of consultation with local communities and a failure to comply with waste and pollution management strategies. Shortcomings that resulted in significant harm to the local environment and damage to local communities’ health and livelihoods.

Thanks to ‘legal immunity for investments’ the ADB can’t be held responsible for these crimes. So, after 50 years of getting away with this impunity Friends of the Earth Asia-Pacific joins other social movements to demand the withdrawal of ADB immunity. This would at least enable people to sue the bank for the impacts its coal funding has on local communities and climate change.

Many multilateral banks have reduced their coal funding in response to climate obligations. Sadly none have stopped funding coal altogether.

The time to stop funding coal is NOW

Given the danger that burning coal poses to the global climate, it’s time the ADB took some moral leadership. The bank must ban the funding of all coal projects. It should use its influence to encourage other multilateral and bilateral public lending institutions to do the same. This is a particularly pertinent point, given the emergence of new lending institutions which, sadly, seem to be embracing coal. For example, the Asian Infrastructure Investment Bank (AIIB), which claims to be a ‘green, clean, lean’ bank for the region. Yet the AIIB’s draft energy strategy states that, ‘coal-fired power plants would be considered if they replace existing less efficient capacity. The ADB could therefore play a crucial role in halting coal financing.

The Asian Development Bank is facing increasing pressure from all sides; internationally, locally and from its own shareholders. The hypocrisy of their climate action public relations spin is becoming increasingly untenable as climate change becomes a daily reality for Asia’s poor. The time to stop funding coal is now. 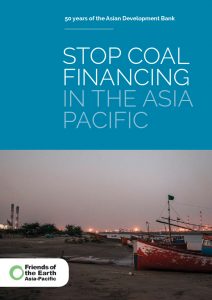