Skip to content
HomeNewsThousands mobilise to call for food systems that empower people, not companies 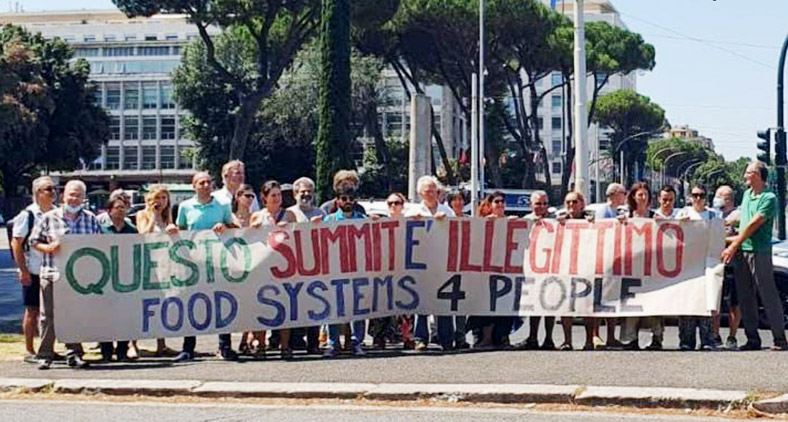 3 August 2021. Rome, Italy. Between 25-28 July 2021, some 9,000 people gathered for a mostly virtual counter-mobilisation to oppose the United Nations aFood Systems (UNFSS) Pre-Summit. The alternative forum was hailed a huge success, as it drew together a wide variety of attendees and was able to catalyse and amplify a counter-narrative to the official proceedings. With critical articles and pieces published in major media outlets such as the BBC, Al Jazeera and Italian state TV Rai, and several thousands of #FoodSystems4People posts on social media seen by potentially 10 million users, the counter-mobilisation succeeded in reaching a broad public with its vision for genuine transformation of unsustainable food systems.

The counter-mobilisation provided a space for dialogue about the threats posed by increasingly corporate-controlled and globalised food systems, and the already existing viable solutions to overcome them. An opening declaration summarising the demands of the People’s Autonomous Response to the UNFSS – a platform of 330 organizations who took part in the counter-mobilisation – was officially released. This civil society group is urging that policy discussions and decisions be made in the UN Committee on World Food Security, the only multilateral space with established inclusivity and accountability. “The Food Systems Summit process was designed to serve a corporate agenda. How do governments accept having their authority and sovereignty taken over by the industry?,” questioned Paula Gioia, smallholder food producer and member of La Via Campesina.

On 26 July, three different round tables were organised, aimed at unmasking the UNFSS and its attempts to open the doors for the corporate capture of food governance and science. “Food Systems are more and more designed to empower companies, not people,” said Ali Aii Shatu from the Indigenous Peoples of Africa Coordination Committee (IPACC). The panels of speakers from social movements, Member States, UN and academia echoed a recent statement by hundreds of academics and reiterated by Zoltán Kalmán, Retired Ambassador and Former Permanent Representative of Hungary to the UN Food and Agriculture Agencies in Rome: “We don’t need a new Science-Policy-Interface for food. Instead, we should strengthen existing models such as the High Level Panel of Experts (HLPE)”. In the same vein, the International Panel of Experts on Sustainable Food Systems (IPES) officially announced its withdrawal from the UNFSS process.

On 27 July, the counter-mobilisation continued building momentum with 15 virtual dialogues on topics ranging from reclaiming Africa’s seed sovereignty, to building justice-based alternatives through agroecology, human rights and food sovereignty, and how democratization of food systems can prevent corporate control. Shalmali Guttal from Focus on the Global South said, “We need more control over corporations, we need strong regulations and to prioritise the public interest. We must link food systems to food cultures, not separate them from our society.” Four sessions were dedicated to celebrating people’s vision for reclaiming power and transforming the industrial food systems in Abya Yala (Latin America and the Caribbean), Turtle Island (North America), Africa and Asia.

The counter-mobilisation ended with statements from indigenous leaders and representatives of social movements, as well as a mystica ceremony led in the Zapoteca language. Saúl Vicente of the International Indian Treaty Council closed with a message of hope: “They wanted to bury us so that we would disappear, but they didn’t know we were seeds.”

The People’s autonomous response to the UNFSS is now assessing the outcomes of the UN Pre-summit and will monitor the process as it unfolds. However, it is already unequivocally clear that the pre-Summit has ended without any resolution of the fundamental issues, like binding rules to force agribusiness corporations to respect human rights and protect the environment, end pesticide use, and end their monopoly over the global seed market. These are just some of the issues that hundreds of organisations have demanded be addressed. The official Summit is due to take place in New York in September 2021. 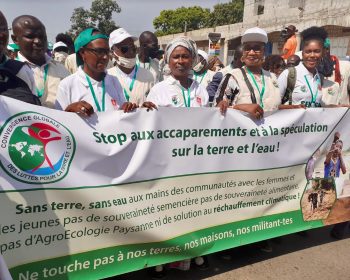