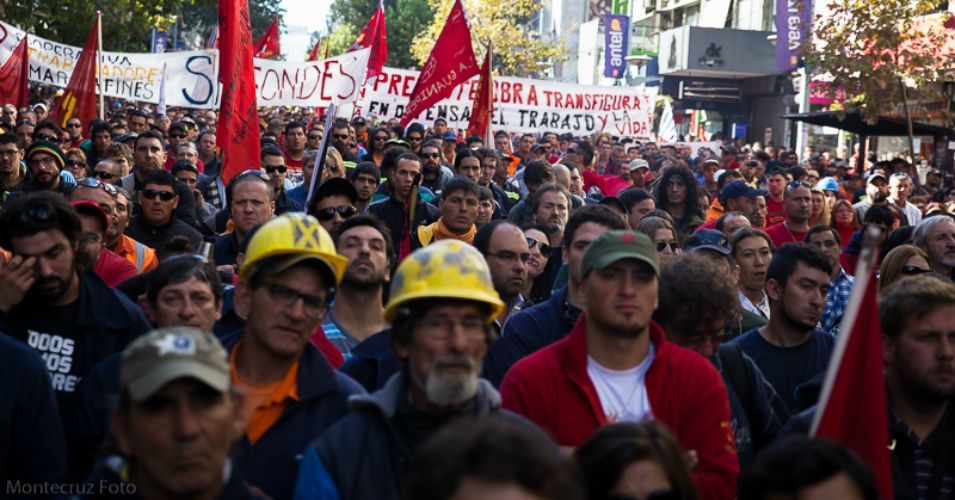 A strong coalition of trade unions, environmentalists and farmers working together on an effective public campaign were able to take on the interests of the world’s biggest companies and win. Last week the Uruguayan government decided to end its involvement in the secret negotiations of the Trade in Services Agreement TISA, signifying an important victory in the global fight against bad trade deals.

Uruguay has created a blueprint for how to stop this corporate-driven agreement.  It is time for  other countries to follow the lead and end TISA once and for all.

After months of intense pressure led by unions and other social movements—including a general strike on the issue—the Uruguayan President listened to public opinion and left the US-led trade agreement. The overwhelming majority of members of the ruling Frente Amplio party believe that the deal would undermine the government’s national development strategy and therefore considered it “unadvisable to continue participating in the TISA negotiations”.

The little-known TISA negotiations involve 52 nations, who together comprise around two-thirds of the global economy: the United States, European Union and 23 other countries, including Turkey, Mexico, Australia, Pakistan, Taiwan and Chile. It relates to the ‘services sector’ of the economy, which in the EU makes up approximately 75% of the total economic activity.

The agreement being negotiated aims to do away with “domestic regulation” of services with a special focus on certain sectors where free exploitation by corporations would increase at the expense of public interest, such as: finance, telecommunications, internet and e-trade, government procurement, transportation, energy services, postal services and the so called “environmental services.”  For example, this means prohibiting countries from adopting privacy laws that limit cross-border data flows of sensitive information or require strong data protection.

Despite its wide ranging effects on every part of our economy, TISA is negotiated in complete secret. The public will not know the full details of the text for five years after the agreement comes into force or the negotiations are otherwise closed. It is travesty of democracy that our elected governments will not tell us the laws they are making. The only information available about the agreement has been leaked by Wikileaks.

TISA is driven by the US administration and big business who promote it as a way ‘to boost growth and productivity.’  Yet as Jane Kelsey of the University of Auckland explains, “the main goals of the negotiations are to increase the commodification of services usually performed by the State (such as education, health care, leisure, transportation, etc.), to put more pressure to privatize public utilities and to dismantle the State’s regulating capacity.”

The TISA negotiations, together with the Trans-Pacific Partnership Agreement (TPP) and the Transatlantic Trade and Investment Partnership (TTIP) act to further empower transnational corporations through special rights and provisions.  It is also an attempt to  counter the growing economic and geostrategic importance of the emerging BRICS bloc (Brazil, Russia, India, China and South Africa).

Yet these trojan horse trade deals are not inevitable.

By leaving the TISA negotiations, Uruguay has created a blueprint of how to beat these  corporate-driven agreements. A strong coalition of trade unions, environmentalists and farmers working together on an effective public campaign were able to take on the interests of the world’s biggest companies and win.

Information and clear communication was key to the campaign. The negotiation texts released by WikiLeaks and assessments by international experts helped to break the secrecy surrounding the negotiations. Then when Uruguay entered the TISA negotiations in February social movements were able to launch a public awareness campaign that gave rise to ongoing public debate in the media.

The Stop TISA campaign was able to successfully lobby and engage the government on the issue. It exposed the negative effects that Uruguay’s participation in the trade deal would have on key government policies in health and education, as well as the role of the State to address inequality.

For example, TISA attempts to transform healthcare into a tradable commodity would “raise health care costs in developing countries and lower quality in developed countries,”  according to Dr. Odile Frank of Public Services International.

Building a strong coalition of social movements and non-profits  against TISA enabled a popular opposition to the agreement to grow rapidly across diverse sections of society, from doctors to train drivers. The Workers’ Trade Union Federation of Uruguay (PIT-CNT) played a crucial role in organizing mass mobilization. Thousands marching in the streets and a general strike against TISA increased pressure on the government and led it to walk away from the deal.

Stopping TISA in its tracks is a huge victory for the Uruguayan people and their fight for a more just and sustainable future. It is time for all other countries involved in the negotiation to do the same and end this bad trade deal.

This article was originally published by Common Dreams