Skip to content
HomeNews50 years of fighting for environmental justice 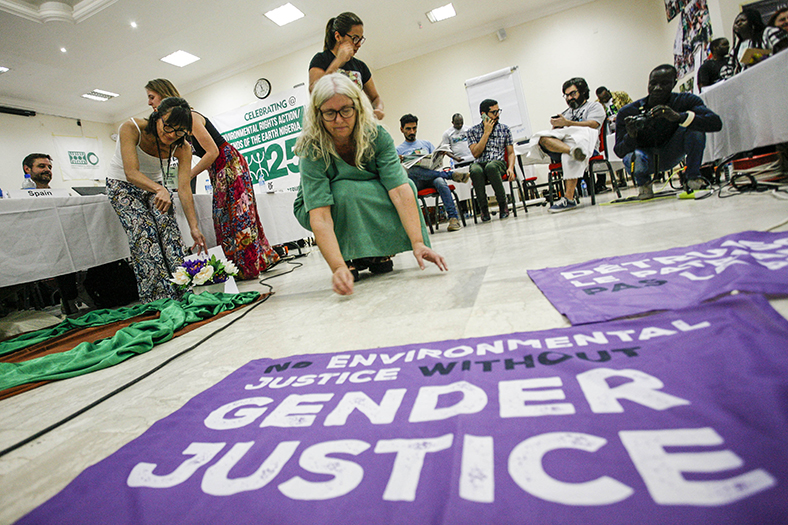 Karin Nansen reflects on Friends of the Earth International’s past, present and future as we strive for system change.

Our 50th Anniversary is an opportunity to assess our contributions to environmental justice, learn from our history, analyse the current international context and challenges ahead, and look forward to the part we can play in the wider movement for system change.

For me, Friends of the Earth International’s history is inseparable from my own as an activist in the international arena. My first meeting with member groups from other parts of the world was the 1992 Earth Summit in Río (United Nation Conference on Environment and Development -UNCED). Prior to which Friends of the Earth International took part in a critical process, joining the voices of civil society globally to denounce the independent sector – the predecessor to multistakeholderism –  which was designed to legitimate transnational corporations as non-governmental actors, giving them a key role before, during and after UNCED. In Río, we denounced the power of transnational corporations and exposed their responsibility in destroying the environment and livelihoods and deepening inequalities. We made the case against over consumption in the North and the concentration of resources as root causes of the global social-ecological problems we were facing – climate change, biodiversity loss and deforestation – contributing to the argument on the differentiated responsibilities between North and South.

That same year, I was honoured to be a REDES/ Friends of the Earth Uruguay’s delegate at the Friends of the Earth International General Assembly in Spain, where we discussed among other issues, the need to address the foreseen social-environmental impacts of the Uruguay Round of The General Agreement on Tariffs and Trade (GATT), which led to the creation of the World Trade Organisation (WTO). This initial discussion, through further analysis and advocacy work, finally resulted in our Trade, Environment and Sustainability programme to fight neoliberalism and the power of transnational corporations, including a campaign against the WTO.

At the time, many Friends of the Earth International organisations were struggling against FMI structural adjustment programs in the Third World, aimed at imposing the privatisation of public services, unrestricted imports and a productive model centred on the export of raw materials. In the early 1990s, our member organisations in Latin America resisted President Bush Sr.’s Initiative of the Americas – the forerunner of the Free Trade Area of the Americas (FTAA) – and the debt-for-nature swaps. In 1997 Friends of the Earth US invited other groups to join the campaign against the Organisation for Economic Co-operation and Development (OECD)’s Multilateral Agreement on Investment, which was negotiated in secret and aimed to open the global South to unrestricted investments by Transnational Corporations which would enjoy enormous benefits, including the National Treatment clause and the dismantling of Southern countries’ performance requirements.

But it was the struggle against the WTO which allowed Friends of the Earth International to develop an in-depth political-economic analysis of the impacts and threats of neoliberal globalisation for environmental justice and the realisation of the rights of our peoples.

The neoliberal policies of the WTO, FTAs and Investment Treaties, were designed to enable the territorial expansion of capital and the inclusion of nature, life and society in the accumulation circuit, as well as giving transnational corporations greater power in decision and policy making.

The analysis of and struggle against neoliberalism, resulted in major Friends of the Earth International campaigns against free trade and investment agreements, the power and impunity of transnational corporations, and the privatisation and commodification of water. It also fed into our work around climate justice, forests, biodiversity and GMOs and against the imposition of market logic in environmental policy, for example, market mechanisms within the framework of the UNFCCC.

As more member groups from the South were joining us, we continued to develop our programmes, campaigns and struggles based on environmental, social, economic and gender justice; the recognition of the ecological and climate debts owed by the North to the South; the importance of peoples’ sovereignty and the need to dismantle all forms of domination and exploitation. All of which informed our vision of the world, which was agreed in 2005.

Today, we face deepening crises that threaten the ecological systems that sustain life and peoples’ rights globally. The systemic crises – climate, biodiversity, food and water – are already having devastating impacts all over the world, severely altering natural systems, with huge implications for peoples and communities whose livelihoods are being destroyed, who face displacement and the loss of their homes and lands, for whom the lack of water, sickness and hunger are daily realities. These profound social ecological crises are exacerbated by increasing inequality, care and political crises.

The crisis of care is evident in the organisation of society to guarantee capital accumulation rather than protecting life. A society increasingly permeated by the market logic, that transforms all dimensions of life and nature into commodities. Such a neoliberal market society dismantles and privatises social security, public services and health and education systems, with loss of rights for the working class, women and migrants. Care work is further entrenched as the sole responsibility of working class and black women. It strengthens the sexual division of labour and deepens the exploitation of women’s work and bodies.  Violence against women as a means to controlling their lives and bodies is a vile reality that cannot but call on our conscience.

Within Multilateral negotiations there is an attempt to impose market-based responses to the crises that are functional only to the interests of transnational corporations and the financial sector. This reductionist approach converts nature into units that can be traded on the market. Emission permits or carbon credits trading, compensating for the destruction of biodiversity somewhere else, reducing natural processes to ecosystem services, are examples of attempts to commodify nature and to continue the accumulation of capital and the very economic activities that cause the environmental crisis, under a green veneer. Sustainable agricultural intensification and climate-smart agriculture are, similarly, attempts at greenwashing a deeply polluting and destructive production model.

Transnational corporations are determined to prevent the development of public policies that promote a radical transformation of the energy and food system and regulate their activities and limit their destructive capacity. For them the current crises are a business opportunity, which explains why they are driving the commodification of nature and adoption of technological fixes that allow them to maintain and increase their control over nature and rate of profit. To this end, they deploy lobbying strategies and actions to co-opt decision-making forums and processes.

In many countries we are witnessing a crisis of democracy, with right wing forces coming into power with hate, racist, xenophobic, misogynist and anti-working class and anti-rights discourse and policies. Corporate capture of decision making is becoming a crude reality, alongside the reduction in  opportunities for social organisations and movements to express themselves. We are experiencing the erosion of hard won rights, opening the way for further oppression and exploitation. Communities, grassroots organisations and social movements face increasing persecution and criminalisation – even assassinations – as a systematic strategy to silence their voices and erase their capacity to organise, resist, mobilise and transform our societies.

The Covid-19 pandemic has exposed the worst features of a society organised under a capitalist, patriarchal and racist system that privileges the accumulation of wealth and power. It has thus reinforced the mobilisation against neoliberalism, for the reorganisation of the State to serve the needs of the people and strengthen public services and health systems.

Today, the urgent need to radically transform our societies and change the system, as proposed by Friends of the Earth International, is more evident than ever. Peoples all over the world are fighting to take control, to reorganise the energy, food and economic systems and to undo the dichotomy between nature and society. There is no doubt that Indigenous Peoples, black communities, peasants and fisherfolk, whose livelihoods depend on forests and biodiversity, are the ones really protecting them. Thanks to the long and courageous struggle of feminist movements around the world, care work is finally being recognised as key to the sustainability of life, and thus the need to reverse the sexual division of labour and the separation of productive and reproductive work, as well as to advance women´s autonomy.

If we are to truly transform our societies, we urgently need to dismantle all systemic oppressions -class, racism, patriarchy, heteronormativity, colonialism- that curb our rights and prevent us from being political actors.

Our potential to contribute as Friends of the Earth International together with its member groups and international allies is huge.

We are deeply rooted. Our member groups, allied communities and social movements are leading the resistance against corporate power and the violation of peoples’ rights. They are resisting landgrabbing, water grabbing, deforestation, pollution and the destruction of livelihoods and territories. They are campaigning against mining, fossil fuels, mega dams, agribusiness and false solutions in all arenas and across all continents.

They are building real people-led solutions, demonstrating how to address the systemic social-ecological crises with environmental, social, economic and gender justice, moving away from fossil fuels and industrial agriculture and stopping deforestation. They are committed to climate justice, realising a just transition to public and community controlled renewable energies, food sovereignty and agroecology, community forest management, economic justice and a feminist economy.

We are even stronger when we unite internationally with our allies, to fight the systemic crises and the power and impunity of transnational corporations. We are able to develop clear, in-depth and coherent political positions and narratives which are widely appreciated.

We have learned the importance of and engaged in movement building processes and joint political agendas with other movements, based on justice and peoples’ sovereignty.

We are conscious of the significance of our dedication to building popular movements and peoples’ power. We must and can reclaim politics and public policies to address the systemic crises in many key multilateral fora and expose and fight the corporate capture of decision making.

We need to engage in a “battle of ideas”, a dispute over collective imaginaries and meanings, a dispute of the political sphere and public policy, in order to reverse the attack on democracy and the very notion of justice that is being perpetrated by the right wing and concentrated economic powers.

We are committed to dismantling patriarchy along with all systems of oppression. We have a long way to go, both within our federation and our societies. But our alliance with the World March of Women, La Via Campesina and other feminist organisations only makes us stronger.

We believe in the internationalism we are building from within as well as with our allies. Together we fight systemic oppressions and defend rights. We stand in solidarity with the defenders of territories and peoples’ rights who are being attacked by corporations and national economic powers. We feel every struggle taking place anywhere in the world as our own struggle.

We are currently celebrating a victory against a powerful transnational corporation. A judge found Shell responsible for causing climate change, ordering the reduction of its emissions throughout its production chain. The case was built from an internationalist perspective, and demonstrated how Shell’s power is damaging so many communities all over the world. This victory shows that we, and the communities suffering from the impacts of climate change, have long been right- transnational corporations are responsible for, not the solution to, the problem. No longer can they wreck our climate, territories, livelihoods, cultures and homes with impunity!

Together, as part of the movement, we are stronger!