Skip to content
HomeNewsCelebration and resistance: Friends of the Earth mobilizes in global Week of Action for climate justice

As scientists published their clearest warning yet about the consequences of failing to act to stop climate change, Friends of the Earth International’s members around the world mobilized for #ClimateJustice and against #DirtyEnergy. There is still time to stop runaway climate change—people want action now!

In October 2018 our Week of Action gave us a collective opportunity to raise our voices, together with communities and allies, by joining and participating in protests, actions, gatherings and workshops. We reject the continued onslaught of dirty energy and other climate-wrecking projects—we are resisting new oil exploration and exploitation, fighting fracking, ditching dams and saving forests. Our energy systems need to be transformed to tackle climate change.

The Week of Action – part of the Reclaim Power Campaign 2018 – began with a stark warning from the Intergovernmental Panel on Climate Change’s new Special Report on Global Warming at 1.5 degrees. As Karin Nansen, Chair of Friends of the Earth International explains: “This is a climate emergency”. We need new international energy systems and an end to dirty energy to keep global warming below 1.5 degrees without the need for dangerous techno-fixes.

Our member groups around the world are helping to sound the alarm, mobilizing for an urgent, equitable and ambitious response to the climate emergency.

The evidence is in: #IPCC Special Report on 1.5°C Global Warming shows we can only stop runaway #ClimateChange if we act NOW. But we need radical responses, not techno-fixes, to protect peoples and planet | PRESS RELEASE https://t.co/nsNnQ1OlEx pic.twitter.com/u2mZlZy95w

Youth and environmental activists with KFEM/Friends of the Earth Korea demanded real movement on climate change outside the launch of this critical IPCC report, in Incheon, Korea.

100s of youth and environmental activists demand #ClimateJustice and real action from governments outside @IPCC_CH meeting in #Incheon #Korea ahead of the launch of #IPCC 1.5°C report. Powerful action by @kfem and allies calling on the world to act NOW fend off #ClimateCrisis! pic.twitter.com/aL2HNQec5F

Friends of the Earth Europe, mobilizing for a #fossilfree Europe, warned that Europe was not doing nearly enough to end the fossil fuel age, even though a “safer, fairer and cleaner fossil-free” Europe is within reach if the political will is there.

And Friends of the Earth groups and their allies took action across the world to highlight the climate crisis and to stop dirty energy.

The week kicked off with news of an amazing victory – BUND/Friends of the Earth Germany’s legal action to delay one of the last remaining pieces of the ancient Hambach forest from being destroyed to expand an enormous opencast coal mine was successful and the bulldozers have been stopped until next year at least. A protest rally became an extraordinary celebration as 50,000 people gathered together at the forest to demonstrate.

Go Germany! Last weekend saw a massive show of force for #nature and the #climate, with *50,000* people demonstrating.

This is how to win a safe climate!

And there was more great news during the week in the Netherlands, with an historic victory for the Urgenda Climate Case. The Court of Appeal upheld that the Dutch Government must protect its citizens from climate change. This could set an amazing precedent for Milieudefensie/Friends of the Earth Netherlands’ case against Shell!

,One for the historybooks! Dutch state must take additional measures to prevent climate change Dutch court ruled. And if it’s up to us #Shell is next! #urgenda #klimaatzaak #klimaatzaakshell pic.twitter.com/yUQ4L8UH4J

Friends of the Earth Togo highlighted the impacts and risks of offshore oil exploitation with a press event. 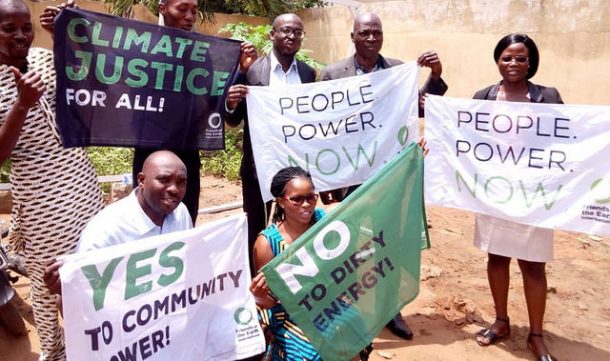 They also launched a video about their work with communities fighting the threat of offshore oil in Togo.

Join @adttogo and communities fighting #oil and #DirtyEnergy in Togo. Clean #CommunityEnergy is the answer!
Join the global mobilization for #ClimateJustice from 6 -13 October https://t.co/XkWQ3zOwPt pic.twitter.com/hw6UbvRrT3

Challenging megadams and ‘the trap’ of mini-dams is critical to pulling the plug on climate change in countries such as Colombia, Honduras, Mexico and Mozambique. Despite the tense atmosphere in Mozambique, where public actions are currently prohibited, Justiça Ambiental!/Friends of the Earth Mozambique has secured billboards publicly opposing the Mphanda Nkuwa mega-dam, and monoculture plantations that prevent climate justice and food sovereignty. 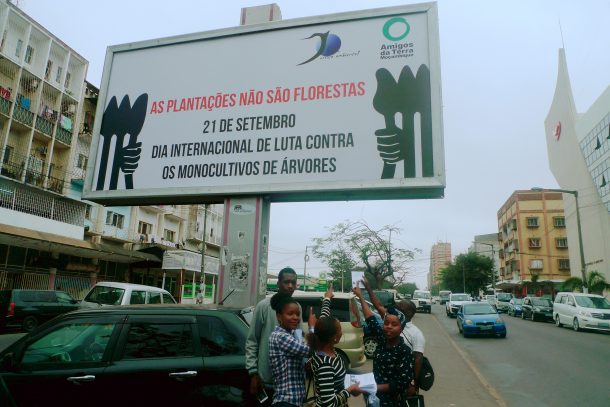 Otros Mundos/Friends of the Earth Mexico organised a workshop explaining why mini-dams are false solutions.

CENSAT Agua Viva/Friends of the Earth Colombia  joined allies for the Second National Encounter of the Rios Vivos Colombia coalition, highlighting that water and energy are not commodities, but are vital to peoples’ lives and climate justice.

Friends of the Earth South Africa/groundWork held a ‘gasdown frackdown’ event as part of the global gasdown frackdown against gas and fracking culminating in this powerful statement.

Friends of the Earth Croatia also held a gasdown event linked to the IPCC 1.5 report release, and called on the Government to stop investing in coal, oil and gas.

Friends of the Earth England Wales and Northern Ireland have also been involved in a Week of Action supporting communities determined to stop fracking in their neighborhoods.

Local communities have led the movement against fracking in Lancashire and up and down the country. As much-delayed fracking sadly gets underway, the resistance to climate-wrecking fossil fuels will only get bigger! Solidarity with @frackfreelancs #GreenGB #ClimateBreakdown pic.twitter.com/cut3GgiEO9

Despite a last bid legal challenge by Friends of the Earth EWNI to stop fracking and blockages of the site, fracking begun on Monday 15 October after seven years of activism to prevent it. Friends of the Earth International stands in solidarity with those communities now living with fracking – an insane move in the week following the IPCC 1.5 report.

⚡️ The news we dreaded: fracking has started in Lancashire.

It’s taken the industry 7 years just to get this far; let’s make sure they get no further.

Friends of the Earth France had a very busy week, beginning with participation in the Alternatiba Tour…

…And then in actions against Société Générale…. 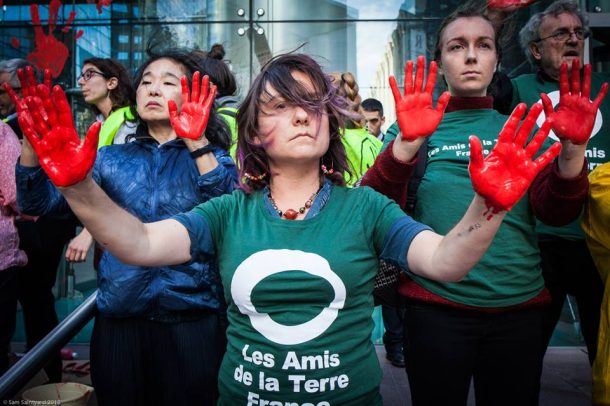 …And finally in the massive civil society climate change mobilizations on 13 October, with over 100,000 people! 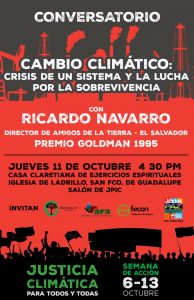 Friends of the Earth Australia combined a focus on wiping out waste and combating climate change with good company and plenty of exercise!

And we’re off on #WalkThisWay2018 – FoE Melbourne’s annual fundraiser. It’s not too late to donate at https://t.co/CCeOiYBc0U as we wipe out waste and combat climate change in style! pic.twitter.com/HzudJKcRrd

Friends of the Earth Finland’s community energy (Yhteisöenergia) campaign joined ‘Fridays with Greta’, the weekly demonstration organized by 15-year-old Greta Thunberg, who plans to sit in front of the Swedish Parliament every Friday until Sweden is on the path to limit global warming below 2 degrees. 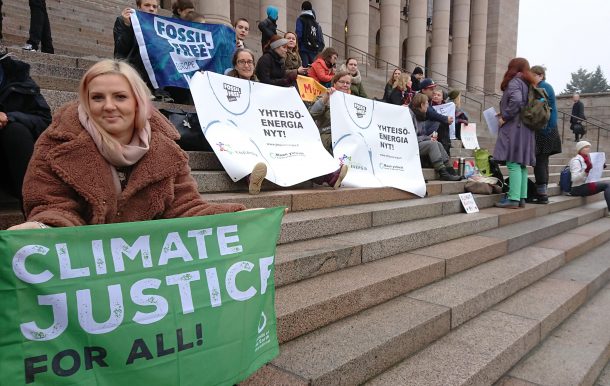 Friends of the Earth Japan visited Wales to put pressure on Hitachi to stop the building of a nuclear power plant on the Isle of Anglesey. 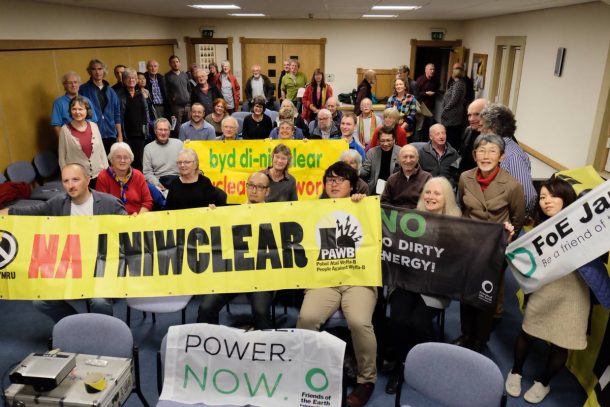 SAM/Friends of the Earth Malaysia used the week to highlight climate issues through social media.

NOAH/Friends of the Earth Denmark’s street circus juggled with flames to demonstrate that indefinite economic growth means that we are – literally – playing with fire. 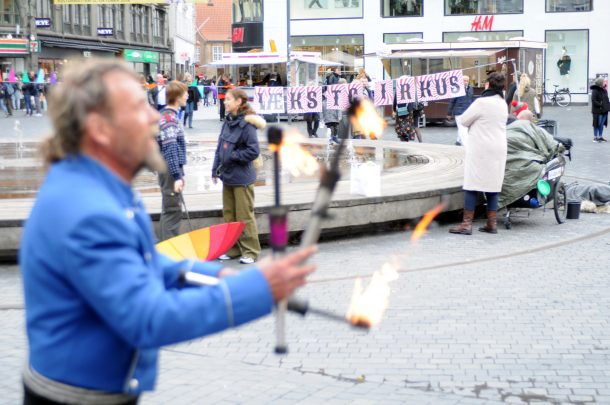 #PeoplePower action by @mtvsz, calling the ????????govt. for an enabling legal and support system for #energytransition and #communityenergy. Ministry aims at min. 3000 MW PV capacities by 2022 – this needs to happen with massive community- and public-owned photovoltaic boom! @FoEint pic.twitter.com/qMuzZg0OKf

In Geneva, thousands of people marched, linking climate justice to the need for a UN Binding Treaty ending corporate impunity for human rights abuses, which are often related to the energy sector and global trade in fossil fuels.

Today the people of Geneva march against climate change. We need to stop corporations like @Shell from polluting our climate en destroying peoples lifes. Therefore we need a #BindingTreaty now! pic.twitter.com/uVhHXTH8op

Our mobilizations and collaboration with others around the world show that when we speak and advocate together, People Power works!

Interview: @Climatemouse talked to us about the Week of Action for #ClimateJustice of @FoEint and the new @IPCC_CH report about a 1.5-degree global warming. To face the climate crisis we need to change the system! https://t.co/XXwC8ZXomS … @foeeurope @FoEAfrica @FoEAsiaPacific pic.twitter.com/gVGONW8gme