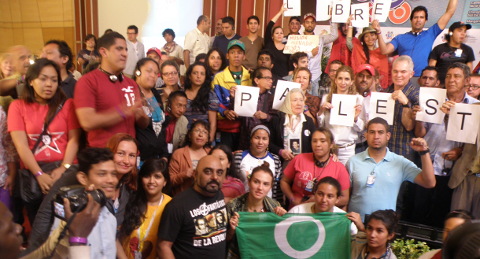 We, social movements, climate justice organisations, popular organisations, NGOs, youth, women and Indigenous groups representing millions of citizens of every colour, creed, nationality and religious belief and those with none – from Latin America, Asia, Africa, Europe, North America and the Middle East meeting in Venezuela at the Social preCOP gathering of global civil society on the climate crisis – are united in condemning these horrific attacks against the besieged men, women and children of Gaza.

We call on the international community to press for the cessation of this wave of deadly violence and the immediate lifting of the Israeli blockade of the Gaza Strip. We call on our fellow citizens and people’s organisations to add their voices to the countless millions already protesting in the streets of every capital in revulsion at this attack by the Israeli state.

Today, the Israeli state began a land invasion against Gaza, afflicting the people of Gaza, subject to an illegal and inhumane blockade since 2007, with new bombings, deaths and destruction including that of a five-month-old child killed in Rafah within hours of the beginning of the invasion.

We deplore all civilian casualties and we consider that, as the occupying force under international law, the State of Israel bears responsibility.

No one has forgotten the massacres perpetrated by the same Israeli army during the operation “Cast Lead” in 2008-2009, resulting in the death of nearly 1,500 Palestinians and that the same excuses were put forward by the Israeli government to justify this murderous attack.

The Israeli government of Benjamin Netanyahu has systematically worked towards wrecking the legitimate desire of the Palestinian people for an independent Palestinian State and an end to decades of Israeli Occupation.

Any chance of peace goes hand in hand with the international community bringing Israel’s impunity to an end and a global campaign of boycotts, disinvestment and sanctions until Israel abides by the relevant UN resolutions.

“In South Africa, we could not have achieved our democracy without the help of people around the world, who through the use of non-violent means, such as boycotts and divestment, encouraged their governments and other corporate actors to reverse decades-long support for the apartheid regime. The same issues of inequality and injustice today motivate the divestment movement trying to end Israel’s decades long occupation of Palestinian territory and the unfair and prejudicial treatment of the Palestinian people by the Israeli government ruling over them.”

We, here at this gathering of global civil society, are working together to stop the climate crisis – and hold a belief in an equitable, sustainable and just world. As part of our belief that ‘another world is possible’ we know that we will not be free until Palestine is free.

End the attack on Gaza Now!