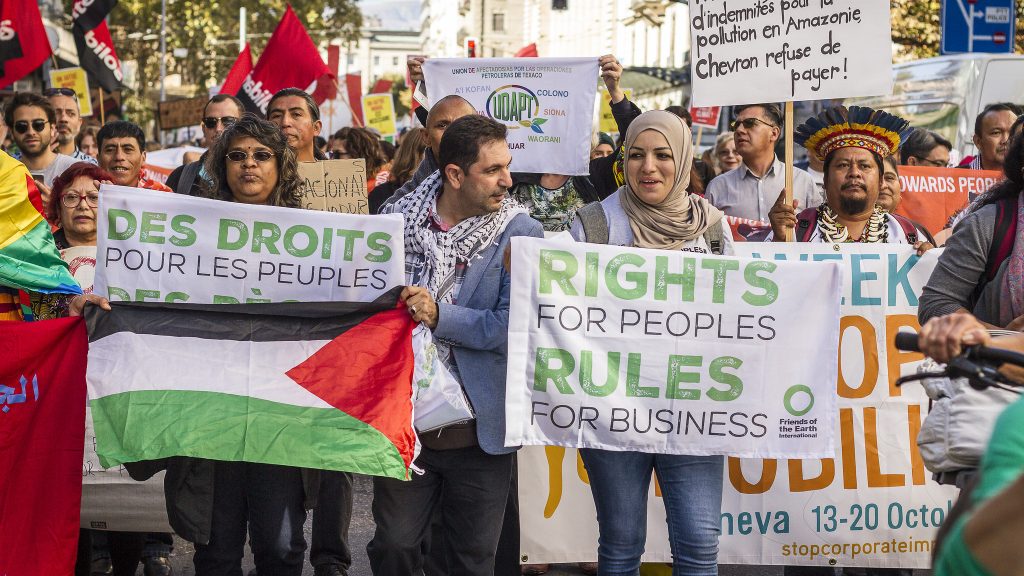 Big Business is devastating the environment and human lives, the world over. Their violation of human rights knows no bounds. Yet, the UN Guiding Principles and the due diligence approach have not been effective in stopping corporate impunity. There is an urgent need for an international legally binding instrument to regulate transnational corporations in regard to human rights, as is being negotiated right now in the United Nations. This comes along with a need for national laws that are based on and support the implementation of this international treaty.

The gas industry is ravaging Cabo Delgado in northern Mozambique, fuelling human rights abuses, poverty, corruption, violence and social injustice. For decades, the Israeli state and its corporation Mekorot, have denied Palestinians access to and control over their land, borders and natural resources. Communities in Brazil are still awaiting reparation and justice following the collapse of the Vale/Samarco/BHP Billinton-owned dam in 2019. These are just three of the countless ongoing corporate atrocities, affecting the global South in particular.

The UN Guiding Principles on Human Rights and Business is a weak and non-binding directive approved in 2011. Although it established that “business enterprises should carry out human rights due diligence”, it dramatically failed to make corporations accountable for their human rights violations.

“The due diligence has not been enough at all. That’s why the people celebrated a victory at the UN Human Rights Council in 2014. The adoption of Resolution 26/9, established a new Intergovernmental Working Group to negotiate a Binding Treaty on transnational corporations and human rights. This was a key milestone towards ending corporate impunity”.

From 24 to 28 October 2022, eighth session of negotiations of this treaty is being held in Geneva. Affected communities from all over the world, supported by the Global Campaign to Reclaim Power, Dismantle Corporate Impunity and Stop Impunity (Global Campaign), are driving the UN process, with a clear list of demands for the contents of the Binding Treaty. A crucial element of the strategy for social movements is now to also lobby for national laws that complement and support the international treaty.

Complementary struggles against big business in the Global South and North

In a historic moment in 2017, France passed a ​​law on the ‘duty of vigilance’ (devoir de vigilance) of parent and outsourcing companies. “This was the result of a tireless struggle –years of campaigning by civil society and those affected by French transnationals’ operations overseas,” said Juliette Renaud, from Friends of the Earth France. Despite some weaknesses, this law is a breakthrough, in that it “addresses the legal complexity of transnational corporations with their multiple subsidiaries, subcontractors and various forms of business relationships they usually use to ensure their impunity.”

This law has started to be used: in 2019, six French and Ugandan organisations including Friends of the Earth France and Uganda, started legal proceedings against French oil giant Total for human rights violations and risk of irreversible environmental harms in Uganda and Tanzania. The case, which is the first based on the new law on duty of vigilance, is ongoing.

Other EU countries are now following in France’s footsteps, like Germany and Austria, Belgium, the Netherlands, Finland, and Luxembourg, which are currently discussing proposals.

In early 2022, the EU unveiled its proposal for an EU law on mandatory human rights and environmental due diligence for companies. Sadly, in its current form the law “fails to guarantee justice or make companies liable for their climate impacts.” In response, 220 organisations called on the EU to address the significant flaws in the directive. The EU’s engagement in the UN Binding Treaty process has been less than exemplary; from member states voting in block against resolution 26/9 in 2014, to several attempts to derail the process during negotiations.

With the Mariana and Brumadinho dams collapse still in memory, the fight to stop corporate abuse in Brazil reached a key milestone in 2022. Human rights violations in this huge Latin American country are rife. That corporations are behind many of these violations comes as no surprise.

Despite the ongoing devastation wrought by Bolsonaro, in August 2022, Brazil formulated a ‘Framework for Business and Human Rights’ bill. It is significant that social movements, civil society organisations, academics and workers’ unions participated in the drafting of the text. The bill will benefit Indigenous Peoples, quilombolas (afrodescendant peoples), communities affected by rights violations and the working class. These are the groups most affected by corporate violations, who stand to benefit from long-awaited laws.

In an innovative move, the bill would establish the primacy of human rights and include direct obligations for transnational corporations – something unprecedented globally. It could then be used to hold companies to account for human rights violations. The proposal itself is based on the experiences of affected communities in Brazil. Equally, they would be key actors in establishing measures for prevention, monitoring and reparation. This is groundbreaking. The bill will be put to a vote, for which no date has been set.

“Tellingly in the case of Brazil, the appetite for action at the grassroots level was inspired in part by the involvement of Brazilian movements in the UN Binding Treaty process,” said the Brazilian Letícia Paranhos. Participation in the Global Campaign built trust and the ability to articulate their demands, which paved the way for powerful participation at the national level. This national law will also help in the creation of mechanisms to implement international rules within Brazil.

“Latin America is fed up with due diligence and guiding principles, measures that landed in a neo-colonial way on the global South. Brazil’s framework law on human rights and business has the spirit of the Global Campaign. It was made based on our Binding Treaty proposal. We need to move forward in our national contexts with legally binding laws based on our demands for the international context. At the same time, these national laws would support the process in the UN, to push for an ambitious international instrument really capable of stopping corporate impunity.”